Two of the team’s designs are now in use in the outside areas at Kwadrant. Overstimulated pupils can now take time to calm down on a piece of furniture called “sitting together apart” whilst “Möbl”, another outdoor seating piece created by Kaat’s team, has become a favourite place for them to sit and talk.

But the students’ other designs will certainly not be going to waste, as Professor Nathan Van Den Bossche, who oversaw the project, explains: “They will shortly be renovating all the other the outside areas on the school campus, They were all so delighted with our students’ designs that they are planning to use some of their other ideas as well.”

Outside spaces for pupils with ASD

“Last year, at the start of the academic year, we were asked to create a design for the outside spaces at Kwadrant, a school for young people with ASD”, says Kaat, who at the time was about to start her final year.

Seven student teams began to work on the project immediately. Kaat continues: “Before we even started to create the designs, we paid a visit to the school to see it for ourselves. That was very useful and gave us a huge amount of inspiration.”

“For the students, that visit was very important; it gave them the chance to see with their own eyes how they could adapt the outside spaces to suit the specific needs of the pupils at the school,” adds Nathan Van den Bossche. “For example, many people assume that the pupils all need a way to calm down during the breaks. But that does not apply to everyone, and in fact, at that moment some of them actually need to be overstimulated rather than understimulated. One way of responding to that need is to provide them with challenging patterns and designs.”

The students received feedback every other week from an expert team which included care coordinators from Kwadrant, remedial educationalists and also a psychologist specialised in autism, professor dr. Herbert Roeyers, who explained to the students how people with ASD perceives the world, and what their needs are.

From concept to design

That was really informative”, says Kaat. “It gave us a real insight into how we needed to approach our design. We decided to work on seating with rounded shapes. Corners have hard edges, which can be perceived as disturbing, almost aggressive even. With “sitting together apart”, pupils can see everything, whilst not being seen themselves. This prevents them from becoming overstimulated, but at the same time they are still sufficiently challenged.”

There is also the technical side of things of course. Nathan Van den Bossche explains in more detail: “As an architect, you must be able to defend the choices you make. You come into contact with all sorts of people. This is something our students have to learn: we take them out of their comfort zone and teach them use a concept rather than a certain form or design as their starting point. If you create a nice shape but it proves to be unrealistic, then that has to be the end of the story. This is why it was important that the teams worked very closely with the architectural concrete manufacturer Decomo. They had to conduct all the negotiations themselves and this taught them how to defend their choices.”

Kaat’s team, for example, were adamant that they wanted to keep the rounded forms that were part of their design. “it is so much easier for a manufacturer to work with straight lines and corners. At moments like that, you have to remain focussed on the end result that you want to achieve.” As well as receiving practical assistance, the student teams also got the chance to see the production process in the factory itself.

Kaat: “We saw how they made the formwork – the mold into which concrete is poured, what exactly happens with the concrete granules, and how they add granules and colour pigments. For a designer that is incredibly interesting: it gives you a far better understanding of both the technical possibilities and the limitations.” 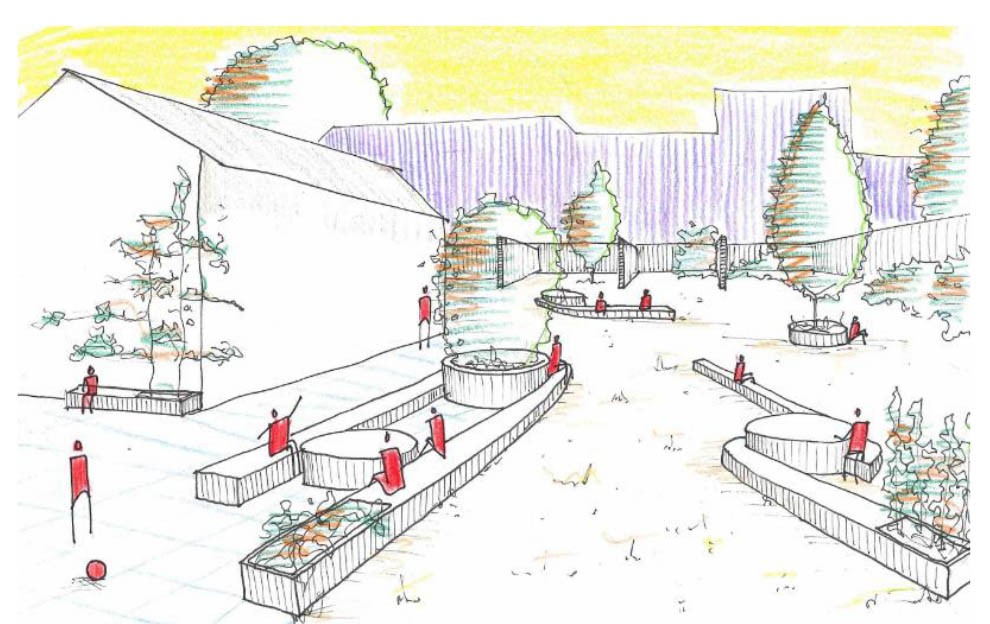 Kaat Janssen graduated last year as a civil engineer-architect. This academic year she has started to work on her doctorate in the Department of Architecture and Urban Planning. In her free time she likes to box, play guitar and read poetry, and she also loves to travel.

Prof. dr. ir. arch. Nathan Van Den Bossche is associate professor of building science (Faculty of Engineering and Architecture). He conducts experimental and numerical research into innovative facade systems, renovation strategies and patrimony, and has worked as expert construction engineering consultant on projects by Zaha Hadid Architects, Renzo Piano, Ian Simpson, Jaspers-Eyers and Stephane Beel, among others. He is currently working with the Politecnico di Milano, advising them on the impact of climate change on the conservation of the Duomo cathedral in Milan and researching the potential of fungus as an insulation material – which means that he’s consuming inordinate amounts of coffee and pasta.

The equal opportunities policy for education is currently under fire: does it really provide equal opportunities? Doesn’t it lower the bar in education? Dirk Van Damme, Head of the Innovation and Measuring Progress Division at the OECD and Ghent University alumnus professor helped to formulate it. Now, although still behind it in principle, he is taking a critical look at its drawbacks. Ghent University professor Piet Van Avermaet, Director of the Steunpunt Diversiteit en Leren (Learning and Diversity Support Centre) defends the choices made, despite the disappointing outcomes.

How photonics is dramatically changing the medical world

The medical field is on the verge of a revolution, all thanks to... light. Medical devices will soon become so small and inexpensive that they will become part of everyday equipment. The driving force behind this technological revolution is photonics. ‘It is the fastest growing ‘‘enabling” technology we know’, says Roel Baets, head of the Photonics Research Group.