Will we see the return of eel in green sauce?

Will eel in green sauce soon be off the menu? It could well be, as the slippery fish is threatened with extinction. Reason enough for Ghent University researcher Pieterjan Verhelst to intervene. He’s looking for ways to save the eel: “The eel is part of our Flemish culture. We must not let that be lost.”

First of all: is the outlook really that bad for the eel?

“Many people may not know it, but the eel is indeed threatened with extinction. Over the past 40 to 50 years, the eel population has fallen by 99 per cent. That is hugely significant. Most people know eels from their plates. In Flanders, this is eel in green sauce. In the Netherlands, they smoke the eel. And in Great Britain they make a stew of it with a kind of jelly. The fact that you can still fish for it and that it’s on a restaurant menu doesn't really give the impression that eels are threatened with extinction.”

How is it that the eel population has shrunk so drastically?

“Eels have to travel a long way to be able to mate. About 7,000 kilometers. First, they stay in our rivers for a few years to build up fat reserves. Once they have enough reserves, they swim to the sea. But in their journey they pass several obstacles: water pumping stations in the polders, hydroelectric power stations and sluices. My research shows, for example, that in a canal full of locks more than half of the eels do not succeed in reaching the sea. Apart from obstacles, there are other factors at play. Pollution, climate change and overfishing also play a major role.” 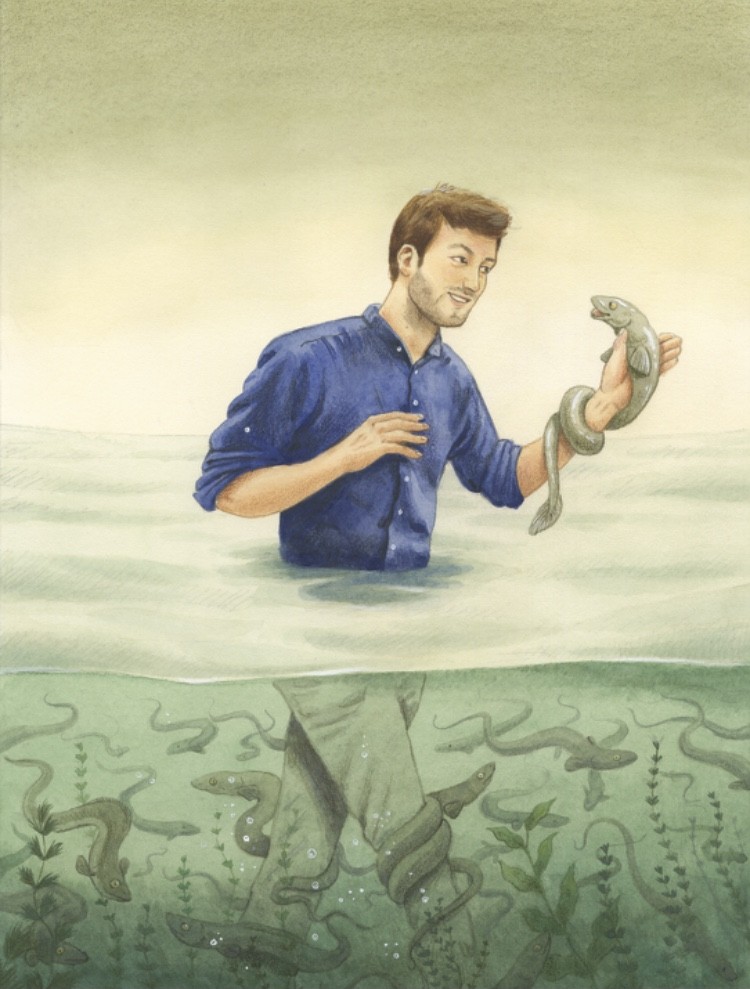 So is it still responsible to eat eel?

“The biologist in me immediately says ‘no’. But it's not that simple. A lot of people just don't know that things are so bad. That is why, a few months ago, I developed a video game for the Science Day in collaboration with Scriptie vzw. In the game, you learn a lot about this fascinating and mysterious species of fish, including about their dangerous journey to the sea.”

You call eels mysterious. Why exactly?

“We don't actually know that much about eels. For example, we suspect that they go to the Sargasso Sea (an area in the Atlantic Ocean to the east of the United States) to mate. But that is based on findings by a researcher who found many young eels in that region about a hundred years ago. So we don’t know for sure. That mystery does make it fascinating. By the way, did you know that the first scientific writings about the eel date back to the time of Aristotle? It is almost a privilege to be able to do research on eels.”

What does your research focus on?

“I study the migratory behavior of eels. In order to follow them, we use ‘acoustic telemetry’. We place transmitters in the belly of eels. The signals sent by the transmitters are picked up by receiving stations in our waters. That way we can follow them until they reach the sea.”

So, once they are in the sea, you can’t follow them?

“It is more difficult, but not impossible. Using ‘acoustic telemetry’ is not an option. We can hardly fill the entire North Sea and Atlantic Ocean with receiving stations. To follow eels in the sea, we use data loggers. This is a kind of thermometer with a depth sensor that stores data. We hang the device on the back of the eel. After a few months, the data logger comes loose and washes ashore somewhere. Because there is an address on the loggers, people can send them back to us for a €50 reward. We regularly receive one, especially after a storm. Based on the data we get, we can see where the eels were at any given time and how they behave in the sea.” 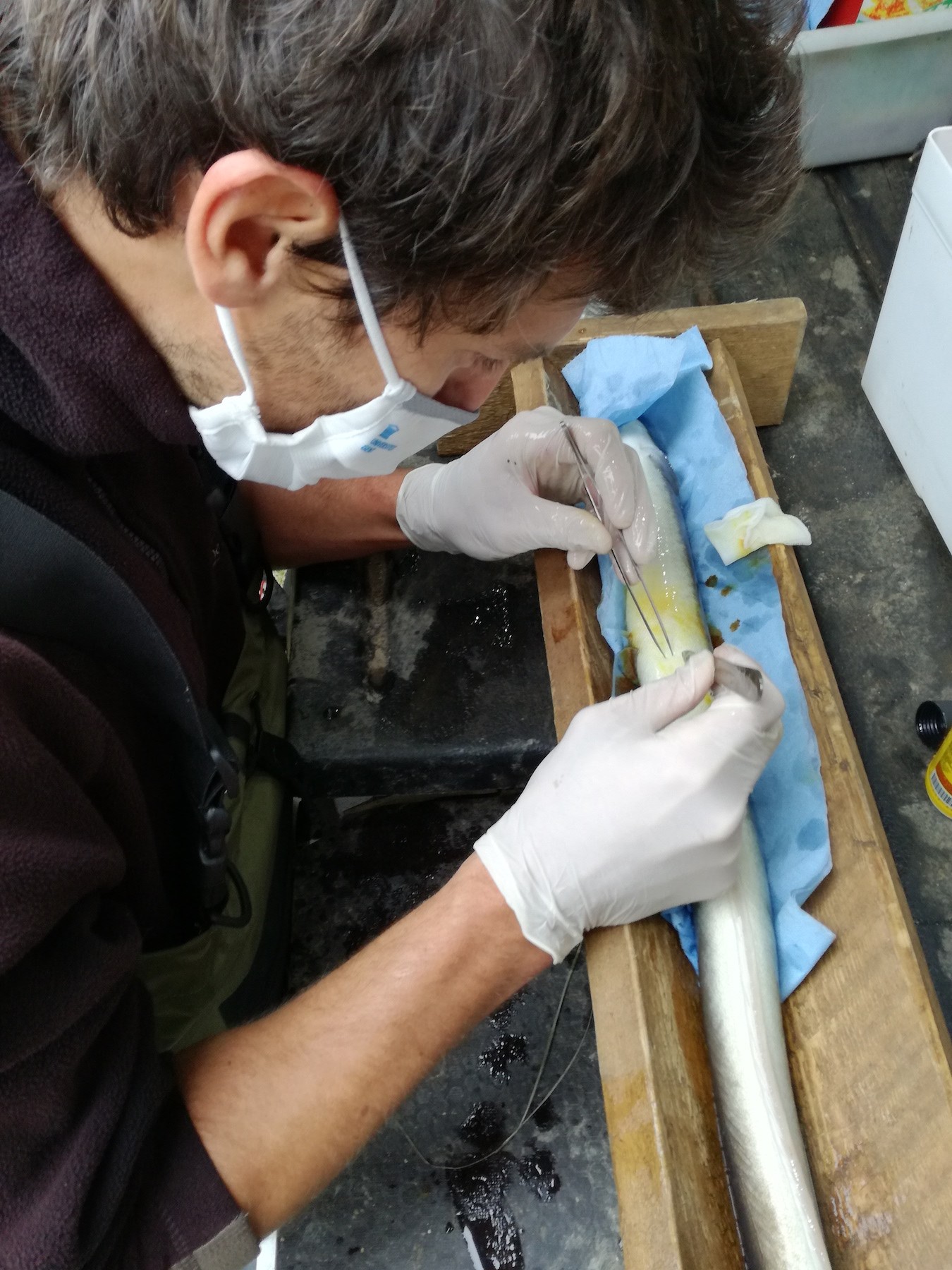 So the ultimate goal of your research is to get the eels back to the sea. Is that possible?

“There are solutions, but it is not easy. Soon, propellers for water pumping stations will come on the market that are safer for fish, so that they don't all end up in flotsam. You can also turn off hydroelectric power stations during the eel migration season. At present, small adjustments are made in different places, which is not always a good idea. It’s not efficient, if you ask me. I believe more in water reservations. Take the Ijzer polder, for example. It has great potential as an eel polder. You have to invest fully in it. Make those reserves places where the eel can live safely and where they will not find any obstacles once they migrate to the sea. No locks, water pumping stations or other things. Not only eels but also salmon and sea trout can benefit.”

“It does. And I realize that the budget for nature projects will always be limited, you have to come to terms with that. Otherwise you’ll become depressed. You have to be realistic and see what you can do with the resources you have. That is why we have to spend limited resources more efficiently. In busy shipping lanes, for example, investing in fish safety solutions makes little sense. There are so many other obstacles that the investment will be nullified.”

Why do you think it is so important to save the eel from extinction?

“First and foremost because it has great economic value in our region. Many fishermen and even restaurants depend on the eel. But it is also important socially. The fact that there are eel festivals proves that it really is part of our Flemish culture. We must not let that be lost.”

Why the fascination with this species of fish?

“I have always found them to be fascinating animals. When I was very young, I often visited my grandparents. I remember very well seeing a tank in the garden with two snakes in it. At least, it seemed that way. Of course, they were not snakes, but eels. That fascination never really left me.”

Do you eat eels yourself?

“No, not any more. That would be crazy.”

Many people do not know that eels are in a bad state. Therefore, researcher Pieterjan Verhelst has developed a video game in collaboration with Scriptie vzw. In this game, you learn a lot about this fascinating and mysterious fish species, including about their dangerous journey to the sea.

We can sort plastic waste, but when it comes to recycling…