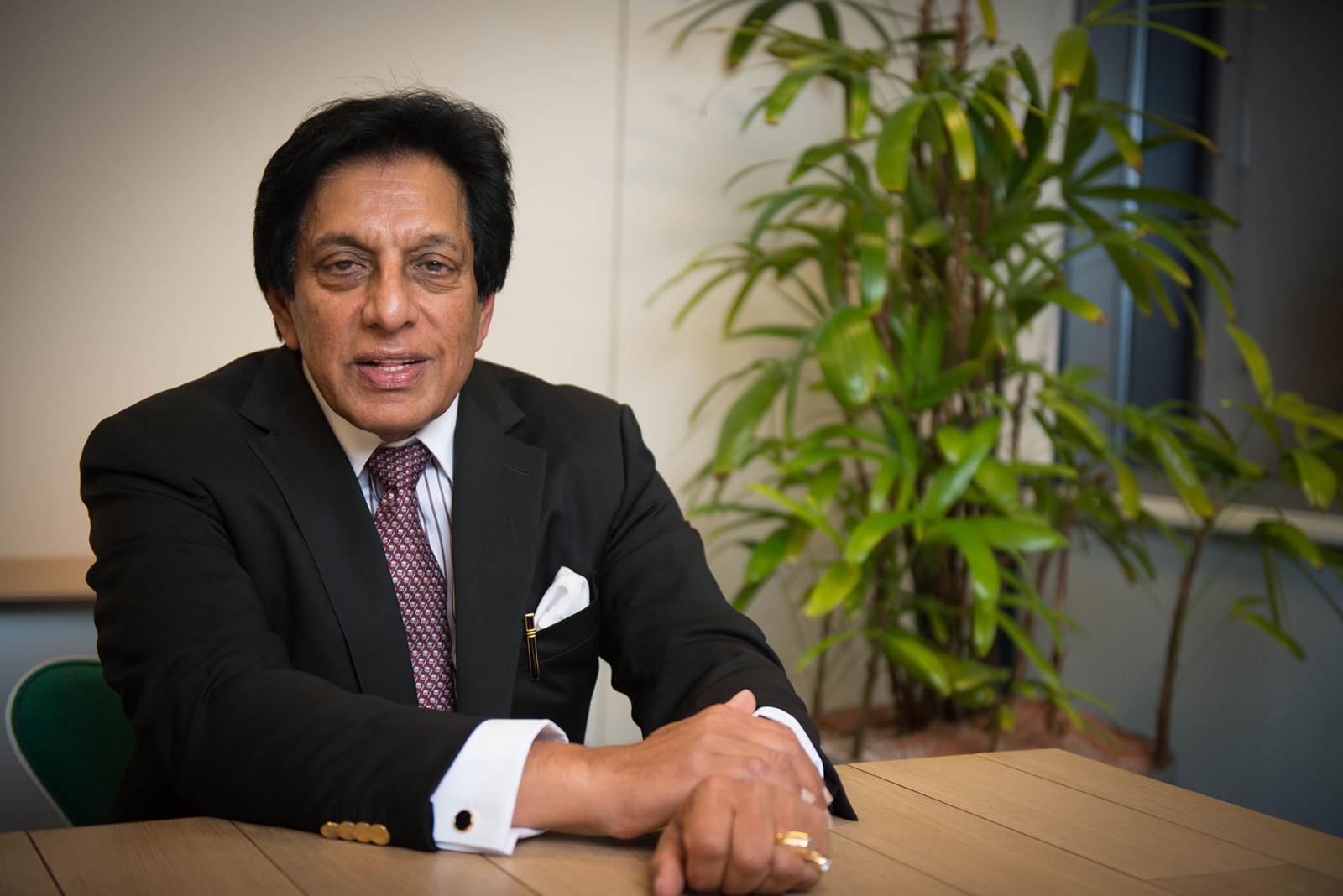 “If you are among the top in the world, the world will come to you.” That is the premise of Dr Ajit Baron Shetty. As a top executive at Janssen Pharmaceutica, he brought the world to Beerse, and as chairman of the Flemish Institute for Biotechnology (VIB), he continues to help build bridges between Ghent University and the world.

It is a fact that Ajit Shetty belongs to the absolute top echelon: many around the world who have anything to do with pharmaceutical sciences know him. It is one of the reasons why Professor Dieter Deforce (Department of Pharmaceutical Sciences) is now nominating him as an honorary doctor. “Ajit has improved our research field in many ways, for instance his connected way of working. Every student in our faculty knows who he is, and what he has accomplished.”

Praise like that, despite his reputation, still embarrasses him. “This honorary doctorate means a lot to me, especially since it comes from a university that is among the world’s best.”

He need not be modest, however. One of his greatest achievements proves his greatest strength: a facilitator who can make the link between scientific research and the business world. In 2004, he built a brand-new research and development center for pharmaceutical giant Johnson & Johnson, with a price tag of 68 million euros.

Not on American soil, but on that of subsidiary company Janssen Pharmaceutica in Beerse. The laboratory conducts scientific research into medicines to treat cancer, among other things, and in 2004 led to him being named ‘Manager of the Year’.

Best of both worlds

Universities and companies need each other, especially in the pharmaceutical world. Dieter Deforce: “More than half of our students end up in these companies, or at least come into contact with their medicines at some point. The most brilliant academic researcher is nothing without the business world. It is very simple: only if they are willing to finance, can we develop medicines. We can also learn a lot from their expertise. Think of the corona vaccines. How could we develop them so quickly? Thanks to cooperation between universities and companies, and between different research fields and institutes.”

“That’s absolutely right,” confirms Ajit Shetty. “Academic and industrial research brings out the best of both worlds. You start with basic research, which you develop further in the laboratories. When you connect people, you achieve much more.” 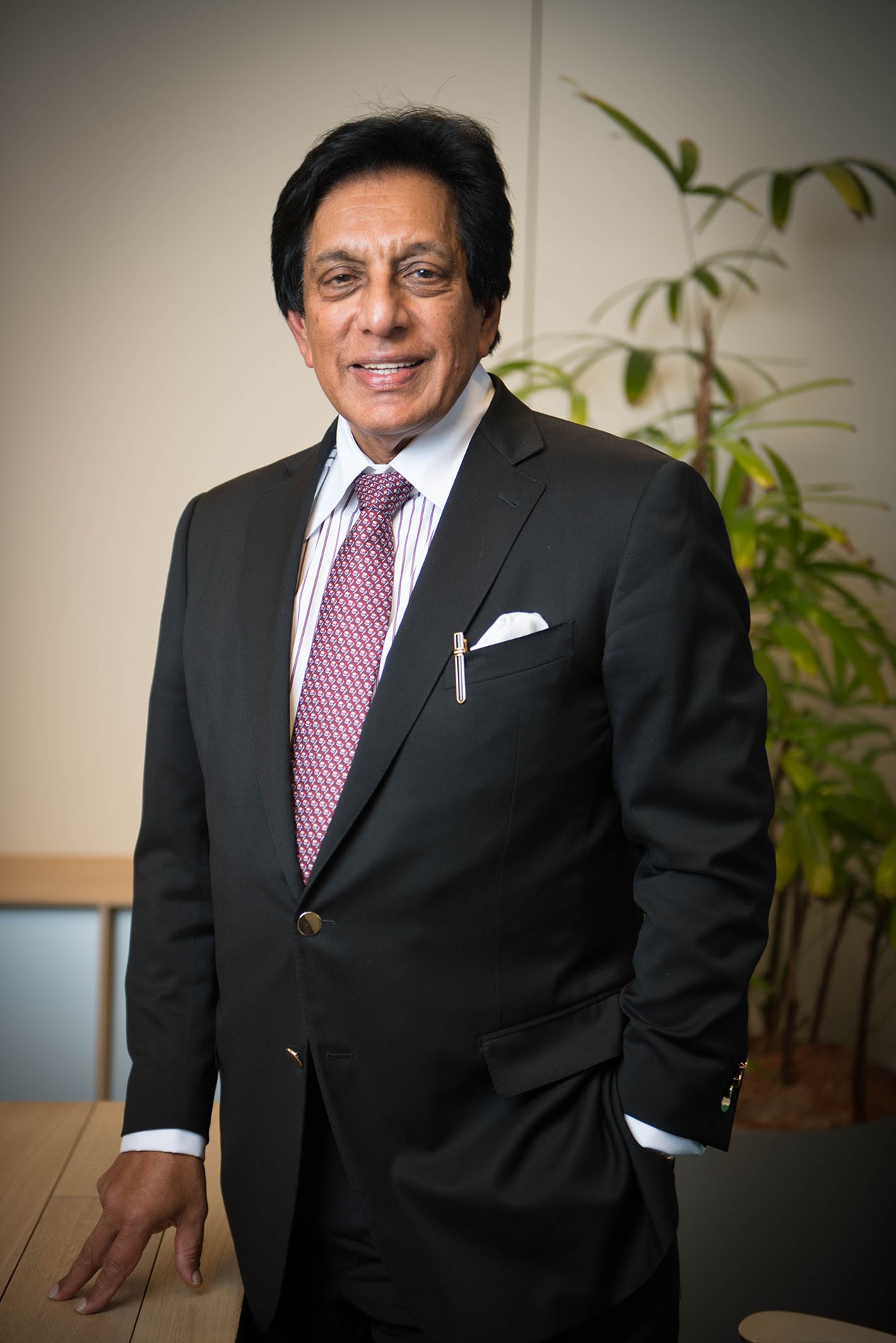 And that is exactly what Ajit Shetty can do like no other. “It’s unbelievable how many people Ajit knows”, says Dieter Deforce. “Everywhere in the world he knows someone. This is not only because of his experience, but also because of his exceptionally warm personality. He helps us make connections.”

Ajit Shetty: “It’s like a vicious circle. If you are among the top in the world, top researchers from all over the world automatically come to you. Whether in Beerse or in Brussels. I learned that from the great Dr Paul Janssen, who regularly had to justify the home base of Janssen Pharmaceutica to Americans.”

“And it is the same at the VIB. Researchers from 70 different countries work here. That is an important reason why the institute is among the absolute best in the world: it spreads its wings across the globe and builds bridges with other institutions.” Dieter Deforce concurs. “Belgian students often feel too strongly about their home base. But to conduct research at world level, you have to dare to fly further afield. It is essential to effectively gain experience anywhere in the world, and thus build up your knowledge.”

Freedom and space to innovate

Ajit Shetty has been a man of the world ever since he took his first steps in the scientific arena. He studied in India, obtained his doctorate in Europe and his MBA in America. Incidentally, he got his doctorate at Cambridge University under the wings of Sir Lawrence Bragg, who at 25 became the youngest Nobel Prize winner ever.

Ajit Shetty: “I was lucky to have so many inspiring mentors, such as Sir Lawrence Bragg. Later, it was Paul Janssen, who I think is one of the greatest pharmaceutical researchers in history. They both taught me that everything starts with good research.”

“For example, I remember an anecdote during my early years at Janssen Pharmaceutica. Someone had told me that researchers should register what they spend their time on. Until Paul Janssen suddenly called me to him. 'Ajit, my researchers do research. They should not occupy themselves with other things. It is very simple: either their research succeeds or fails. So, give researchers time to succeed. If you want to know what they do with their time, come to me and we will see.' That was an incredible lesson for me: as a manager, use your common sense instead of controlling everything. Give researchers the space, the freedom and the chance to innovate.”

Scientific research can often provide solutions to social challenges. But is society sufficiently involved in the process? Participative research, in which there is active involvement of the people concerned or those for whom the research is being done, allows researchers to be better connected with the community. It is also the subject of the inspiration dag for researchers that is organized by the IDC's on 1 October 2021.