Who can imagine life without the web? For starters, you wouldn’t be able to read this article. No online meetings or classes as an alternative in these pandemic times. A scroll through your Instagram feed: alas. “Few people have had as great an impact on how we live as Sir Tim Berners-Lee. His invention can be mentioned in the same breath as that of the printing press,” says Ghent University Rector Rik Van de Walle, who is about to explain why Ghent University is awarding an honorary doctorate to the computer scientist.

Sir Tim Berners-Lee, your invention dates back 32 years ago, but you consider it important to continue following its development closely?

Sir Tim Berners-Lee: “Very important indeed. It would have been great if the web had just taken off and everyone loved it. For the first ten years it was. But since then, a lot of problems have emerged. The web is something very powerful, but not everyone is using it for good. We have to keep an eye on that.”

What are those problems?

Sir Tim Berners-Lee: “The web was originally to connect people and share information. Though I deliberately named it ‘World Wide’ I never knew for sure that so many people would use it. It can be used for very good and very bad things and everything in between. For example, a dictator can influence people through the web. It’s an extreme example, but it does happen. We should not be blind to that. But there is another, even bigger problem, which is separate from usage. Today, only just over half of the world’s population is on the web. That also means that half are not on it yet.” 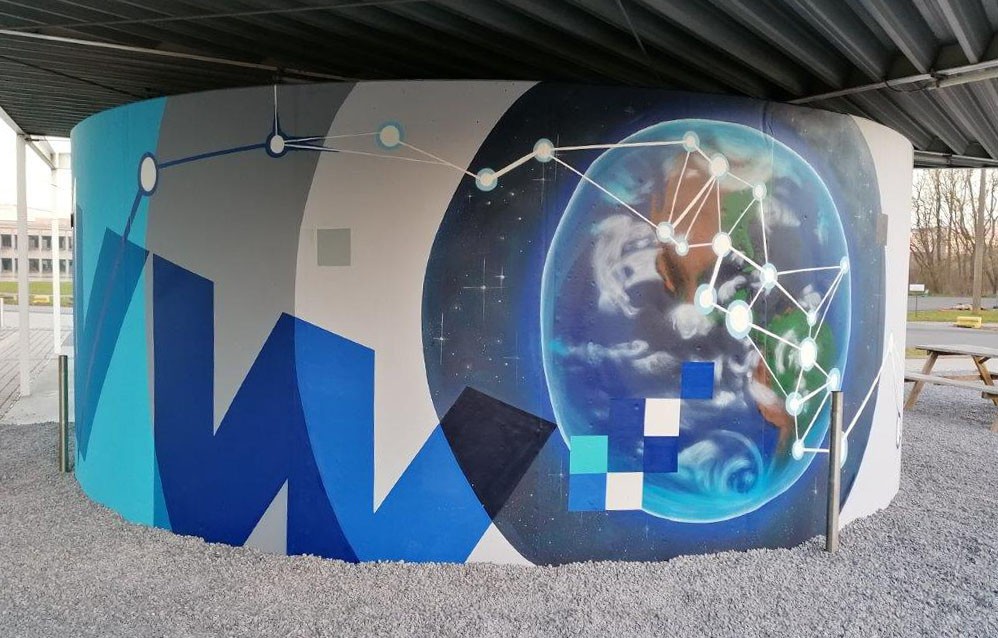 Why is that such a big problem?

Sir Tim Berners-Lee: “The one half that can get on the web has a big advantage. We can look up information, we can start a business, we can grow because of the web. People who don’t have access to the web can’t do any of that. So the difference between those two groups is big and it will get bigger as the web gets more complex. We, as web users, have a moral responsibility to give others that same access.”

Rik Van de Walle: “I absolutely agree. Because there are still so many people who do not have access to the web, there is a big difference in knowledge and power between those two groups. We have to be aware of that. We, universities and academics, have the task of giving everyone access to the web. Without that access, you cannot live in a decent way in today’s society. Just look at the communication around the corona crisis. The rules you have to follow are on the web and basically nowhere else. It’s also about openness from a technological point of view: the web should be based on open standards, meaning that everyone should be able to build applications on top of it and that all end-users should be able to connect to the web.”

On the other hand, there is also a downside to openness: what about our data?

Rik Van de Walle: “That is indeed a big challenge. What happens to the data you put on the web? You have to have control over it. There must be keys to protect it.”

Sir Tim Berners-Lee: “What the Rector says is true. To protect that data, you have to re-balance the web. That is what I am trying to do in my project Solid and my company Inrupt. Solid is a web decentralisation project to regain control of your data. Users have ‘personal online data stores’ or pods, where they control their data and decide who can access what. For example, suppose you and other family members are caring for your grandmother. You want to be able to easily share medical updates with each other, without that data appearing anywhere other than in the pod. You have to be able to choose which data you share, with whom, in a flexible way. That is what we need to work towards.”

Do you want to learn more about the Solid project? Professor Ruben Verborgh explains what they want to achieve.

And Ghent University plays an important role in this, Rector Van de Walle?

Rik Van de Walle: “Yes. Not only is it a fantastic project, but there is also a Ghent University colleague and his team working on it: Professor Ruben Verborgh. That is very important for the university, and also for me personally. When Ruben was a doctoral student, I was his supervisor. To be quite honest: he was exceptionally smart even then. So clever that I sometimes did not fully understand what he was doing (laughs), at least not in the same profound way as he did. One day, he told me that he wanted to send an email to Sir Tim Berners-Lee to work together. I was one hundred percent convinced that he would not succeed. But he persisted and ... he achieved his goal. That is very impressive. This kind of project contributes to the future of the World Wide Web and the fact that we as a university are involved in it, through Ruben’s efforts, is tremendous. I really believe we are delivering world-class science in the projects together with Sir Tim.”

Sir Tim Berners-Lee: "Indeed, all of Flanders has been a great partner and we're doing important work together to bring Solid to the citizens."

Is it exceptional that someone like Sir Tim Berners-Lee is working with Ghent University?

Rik Van de Walle: “Absolutely. He is the leading world authority when it comes to the web. You have to imagine: at a certain moment he receives an email from a young researcher working at Ghent University. Let’s face it, we are a very good university, but we’re not among the top three in the world. That Sir Tim listened to what Ruben had to tell and to ask, and the fact that he believed in him and supported him actively, is really exceptional. It is a wonderful story of how someone who is at the top of his profession is still open enough to listen to others. That is remarkable and it says a lot about what Sir Tim is like as a human being.”

How photonics is dramatically changing the medical world

The medical field is on the verge of a revolution, all thanks to... light. Medical devices will soon become so small and inexpensive that they will become part of everyday equipment. The driving force behind this technological revolution is photonics. ‘It is the fastest growing ‘‘enabling” technology we know’, says Roel Baets, head of the Photonics Research Group.