Ghent University helps to predict the spread of corona, even down to the local level

What if we had one jab instead of two? Or what if we first vaccinated the active population, and only then those less mobile? Such questions cross everyone’s mind from time to time. At Ghent University, biostatisticians actually make models to see what these questions mean.

For a year now, Ghent University, together with other Belgian universities, has been making models that map the spread of the coronavirus in Belgium. And that allows predictions to be made, often with uncanny accuracy. “We saw as early as June that there could be a second wave in October, and the last flare-up was also predicted as early as February,” says Professor Jan Baetens of the Department of Data Analysis and Mathematical Modelling (Faculty of Bioscience Engineering).

“The fact that there was a significant relaxation in September was a major policy slip. In the autumn, the consortium already communicated clearly about this,” he continues. The RESTORE consortium he refers to is a collaboration between Ghent University, UA, Hasselt University, VUB and Namur University. It was the universities themselves that took the initiative in March last year: “We were facing an unprecedented health crisis and we knew we could help by combining our modelling expertise.”

The predictions of the RESTORE consortium are based on three different models. Choosing one model seems more obvious at first glance, but working with three models leads to more representative results, explains Jan Baetens. “The three models are based on assumptions that differ slightly. The calculations therefore lead to different results for each model, but the trends do correspond. If, according to Namur University’s model, we are facing a new wave, then the models of Ghent University and Hasselt University also predict such a resurgence, albeit with differences in predicted peak height and timing. By opting for an ensemble of model predictions, we can validate each other’s results. You see the same approach in climate models. Statements about climate change are based not on one but on dozens of models.”

Combining expertise was one purpose, but there was also another reason: “L’union fait la force, not so? If you want to add weight to the argument, that’s the only way. In the beginning of the pandemic, everyone communicated separately, sometimes with contradictory results. As a result, it seemed as if those biostatisticians didn’t know the answers any more either. In other words, the message got lost.”

With the RESTORE consortium, policymakers and media knew where to get their advice. At the request of the government, the consortium recently tried to predict the impact of easing restrictions in March, April and May. The results were released on 22 February at the consultation committee’s press conference.

In addition, the group also proactively takes action if their regular consultations reveal aspects that are worth including in the calculations. Think of questions such as what the effect is of one jab instead of two, for example.

"In the beginning of the pandemic, everyone communicated separately, sometimes with contradictory results. As a result, it seemed as if those biostatisticians didn’t know the answers any more either. In other words, the message got lost.”
67-33

Modelling through time and space

Each university has a specialism within the consortium. That of Ghent University is spatiotemporal modelling using a holistic approach. That’s quite a mouthful, but Jan Baetens explains: “In spatiotemporal modelling, we describe processes that change through time and space. The spread of corona is spatiotemporal in nature. You have a time-related dynamic, namely the incidence of the number of infections and the number of people hospitalized over time. You also have a spatial dynamic: corona does not spread everywhere in the same way.”

“With our model under development, you can understand the spread down to the local level. You can, for example, take into account the fact that many people move between Antwerp and Brussels, which accelerates the spread. Not only can you predict a new wave, but also where it will likely spread the fastest. In this way you can see more quickly where a local lockdown or other measures are needed.” 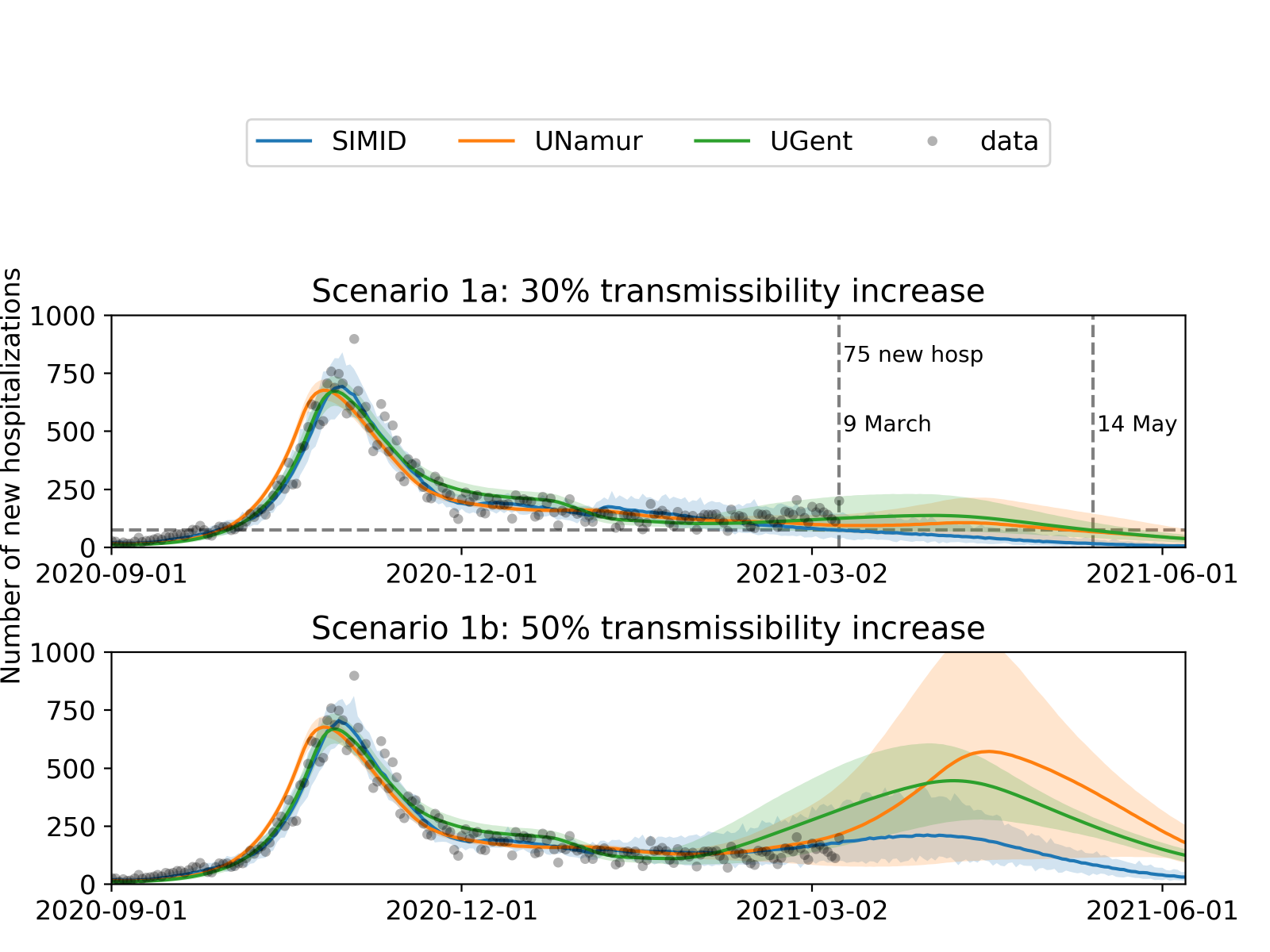 The holistic approach of the Ghent University team is in the quantification of the socio-economic impact of corona. “If, as a policymaker, you are hesitating between two measures, you can decide on the basis of which is the easiest or most difficult to implement. Or you can look at which measure will have the highest cost, taking into account that every death and illness also has a financial and human cost. Then you can choose the corona measures that keep the spread curve under control, while minimizing the impact on people and the economy.”

Baetens is pleased that the consortium can help underpin policy in this way. Although he acknowledges that the tension between science and politics is sometimes significant. “Look at the strategy chosen for vaccinating from old to young. In my opinion, that choice could have been debated more extensively beforehand. We have also made models of other strategies. They showed that, in certain circumstances, vaccinating on the basis of the number of contacts would be more effective in reducing the speed of spread of the virus: in other words, the more mobile — and younger — people first. I think it’s a shame that people are sometimes so dogmatic in their reasoning.”

100 per cent based on models

The work is bearing more and more fruit. In this respect, the press conference on 22 February was a turning point. It was 100 per cent based on the results of the models. It was clearly explained what the impact of relaxations would be on 1 March, 1 April and 1 May, taking into account the British variant and the vaccinations. Jan Baetens is pleased with this evolution: “The most important thing is that the policymakers no longer ignore our predictions.”

The consortium’s predictions are also being used by other government departments, he explains. “The FAMHP (Federal Agency for Medicines and Health Products), for instance, buys medical equipment on the basis of our predictions. Because we not only calculate the number of infections, but also the number of hospitalized individuals, the number of patients in ICU and so on. Then the FAMHP knows how much material it needs to provide.”

Data exchange can be improved

Important steps have already been taken to improve national cooperation, but the exchange of data could still be better, and faster, notes Baetens. “Between the universities, the exchange of information is going well, but to obtain all corona-related data, we sometimes have to arm wrestle.” (laughs)

“It’s about anonymous, public data. In practice, however, this often means waiting months for detailed data, which slows down our work and therefore hampers our positive impact on policy. The long-term forecasts at the national level are fairly accurate; we had predicted the figures we now see as a result of the UK variant. However, the more data that is available, the better we can quantify data uncertainty and its potential impact on the forecasts.”

Between the universities, the exchange of information is going well, but to obtain all corona-related data, we sometimes have to arm wrestle.” (laughs) 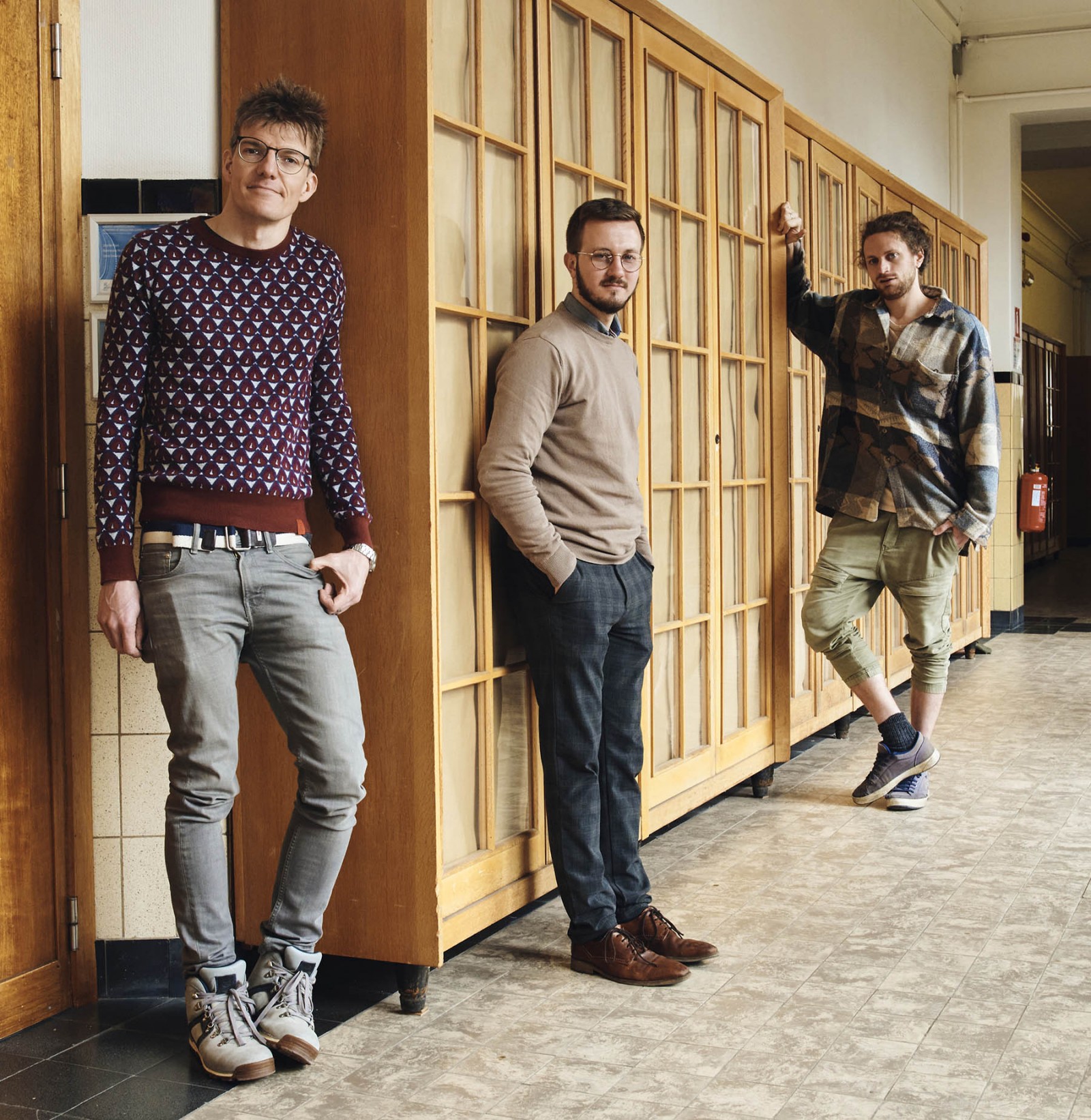 Ghent University’s spatiotemporal model needs very fine-grained data — down to the municipal level if possible — to make accurate predictions of spatial distribution, says Jan Baetens. “That is where we are currently balancing on the edge of what is needed versus what we can get.”

He does envisage solutions for smoother data sharing. “I am looking forward to accessible and not too restrictive data agreements for the exchange of anonymous data between public institutions such as universities, agencies and scientific institutes. It is unfortunate that this is not going smoothly now.”

The scientist in Baetens also makes an important comment on the use of models. “Not everything can be predicted. Predicting the weather is already difficult, but everyone accepts that the weatherman/woman goes off course once in a while. This is more difficult to accept from our models. While we want to predict months ahead, we are faced with a very difficult beast: mankind. Man is difficult to capture in a model, a raindrop is much less so.”

Yet the consortium is trying to do just that. “For the predictions at the national level, we translate human behavior into some parameters that quantify how well the measures are followed, how mobility changes, ... In the spatiotemporal model at local level, we actually include that mobility in the calculations and, for the spread of the virus, we take into account the number of people moving from place a to b on day x and vice versa. There is also a whole range of models for mapping the spread at ‘living room level’, but these are difficult to scale up to a national level.”