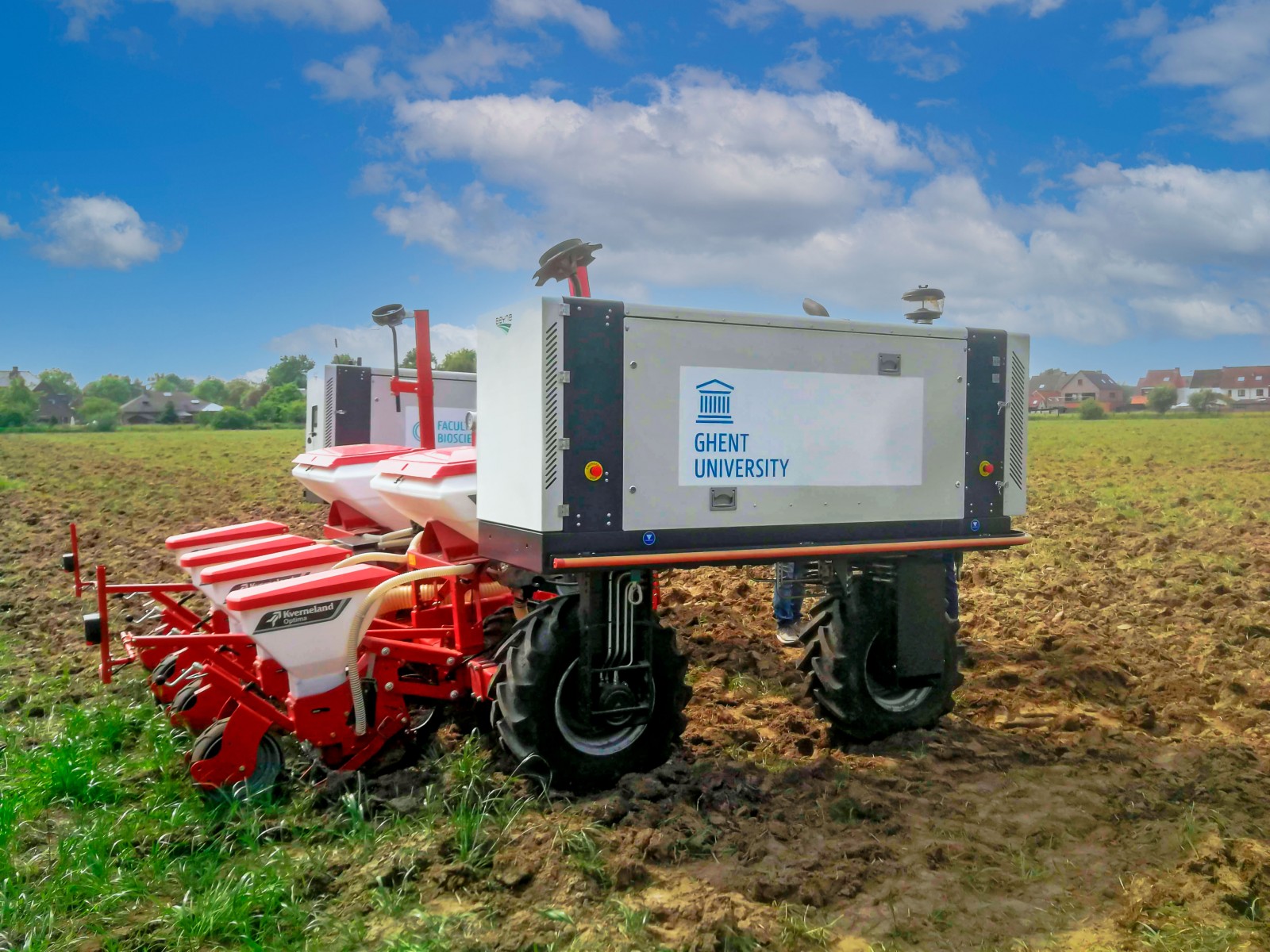 A new development in agricultural robotics has the potential to make the sector more sustainable and profitable. Researchers at Ghent University have developed technology that enables agricultural robots to make site specific adjustments in real time, from soil analysis to soil cultivation, sowing, fertilising and the spraying of pesticides.

Don’t be alarmed if you start seeing autonomous robots working the land instead of tractors. Robotization is not new to the sector. Until now, however, the main focus was on automation, resulting in innovations such as self-navigating ploughs. The new agricultural robot developed by Ghent University goes a step further. It is capable of automatically analysing the soil while simultaneously choosing the correct action for a specific piece of land and performing it fully autonomously.

This innovation forms part of the growing prevalence of precision farming, whereby the land is cultivated according to what is needed. Take fertilisers, for example. Some parts of a field may require less fertiliser if there is already plenty of nitrogen in the soil. A traditional manure spreader cannot do anything about that, so the entire field receives the same amount of manure. In precision farming, fertiliser levels are adjusted to the specific needs of crops and the soil fertility in a specific part of the field.

‘We applied our knowledge of precision farming to an existing agricultural robot, thereby developing a multifunctional, fully automated machine capable of collecting and processing field samples in real time and on a site-specific basis. This benefits both the farmer and the environment’ claims Professor Abdul Mouazen of the Faculty of Bioscience Engineering.

Avoiding unnecessary fertilisation is just one of the environmental benefits. The use of products to protect crops, such as pesticides, is also reduced. This also cuts farmers’ overall costs, as they do not need to buy such large quantities of pesticides. Moreover, given that the robot is lighter than traditional agricultural vehicles, it does not compress the soil to the same degree, thereby reducing the risk of erosion and flooding during heavy rainfall. In the light of the recent flooding, this is a welcome benefit.

Professor Mouazen claims that the technology he and his team have developed can be put onto the market quickly. He hopes that such agricultural robots will be working the fields within three years. Precision farming is the pet project of this Syrian scientist, who gained expertise in the United Kingdom and came to Ghent University through the Odysseus programme. This programme brings together renowned scientists specialising in specific fields, such as precision farming, from around the globe. As part of this project, the Ghent University researchers want to set up a Flemish centre for precision farming.

Plants perk up … with chicken feathers

Chicken feathers are full of valuable substances. Working with STAMAGRO, the start-up in East Flanders, researchers at Ghent University have helped to find a way to turn these substances into a product that benefits the growth of plants. That also means less nitrogen and CO2, because the plants require less fertilizer. And it reuses the feathers, which would otherwise end up in the rubbish. Win-win!

Vertical farming is booming, and above all in an urban context, since this method requires less space in order to grow sufficient food for a large number of people. Vertical farming is an agricultural concept where crops are grown in a tall greenhouse, in vertically stacked layers. The plants are not planted in earth; instead, they are cultivated in nutrient-enriched water. Artificial light is needed to ensure that the plants receive enough light in order to grow. But which sort of light gives the best result? This is the focus of one of the studies by a team of bio-engineers from Ghent University.

“Climate change is a global problem. But if you really want to know its impact, you have to have local data.” So say meteorologist Steven Caluwaerts and bioengineer Pieter De Frenne. They both do research on microclimates, albeit with a different starting point. “Actually, we are very complementary. We should meet more often!”