The Forest and Nature Lab is situated at the edge of the woods in East Flemish Gontrode. ForNaLab for short, it is a research group that is a part of the Department of Environment at Ghent University. “ForNaLab studies a wide range of topics regarding forests and nature,” says Professor Kris Verheyen. There, together with Lander Baeten, Haben Blondeel, Pieter De Frenne and a few dozen other scientists, he is hard at work developing, among other things, climate-adaptive forests.

“Our ecological research is geared towards understanding the way ecosystems work, focusing particularly on forests. At the same time, we try to find nature-based solutions, such as mixed forests, which can better deal with the impact of climate change,” Kris continues.

“All over the world, a lot of attention is going to trees and forests that have been suffering due to global warming,” Lander Baeten adds. “Governments are becoming aware of the urgency of the problem and are allocating funds to research like ours. Several researchers in our group have active mandates or grants.”

During the last few years, dry Springs and Summers have become the norm rather than the exception. This year, too, hardly a drop of rain fell from the sky. “2018, 2019 and 2020 were years of extreme drought,” says post-doctoral researcher Haben Blondeel. “Trees need photosynthesis to grow. If that process is disrupted by the drought, growth slows down.”

Photosynthesis is the process whereby energy from sunlight acts as a motor to transform CO2 into sugars, producing oxygen as a ‘by-product’. Haben: “This process takes places in the tree leaves. The leaves are also the same channel through which water evaporates, which, in turn, activates the flow of tree sap. The drier it becomes, the more water evaporates through the leaves. During extreme droughts and heat, it’s as though the floodgates are opened. But when the drought takes too long, the tree has no other choice than to close down the floodgates. In other words, it closes off the so-called stomata or pores in the leaf-tissue. As soon as this happens, photosynthesis becomes increasingly difficult, which slows down the tree’s growth.”

The drought during 2018, ’19 and ’20 was very exceptional. Haben: “You can clearly see the effects in the tree rings. They’re much smaller in comparison to the rings of the previous years. Due to climate change the frequency of droughts is only increasing.” Lander Baeten: “Analyses done by international colleagues show that 2015 to 2020 was the driest period in the last 2100 years. Their research is based on tree-growth and the chemical composition of the wood, among other things.”

Damage to trees and forest

This longer drought is detrimental to forest health. Pieter De Frenne: “The growth of some trees slows down, while other trees lose all their foliage. This decreases forest density. Some species don’t even survive droughts like these, which changes the composition and the structure of forests. Some respond to the drought by producing more seeds. These trees sense that their time is up, which causes them to quickly want to produce progeny and exhaust their energy supplies.”

But the trees are not the only things suffering damage. Lander: “Trees provide the structure around which the ecosystem forms. They have an enormous impact on all processes taking place in the forest.” Pieter adds: “As soon as some species lose their foliage due to drought, a part of the protective layer providing coolness and shade disappears. The forest floor heats up and dries out more as a result. The size of a forest’s biodiversity isn’t determined by the trees, but by the plants, insects and fungi living on the forest floor. If the sheltering protective microclimate disappears, they, too, are in trouble.” 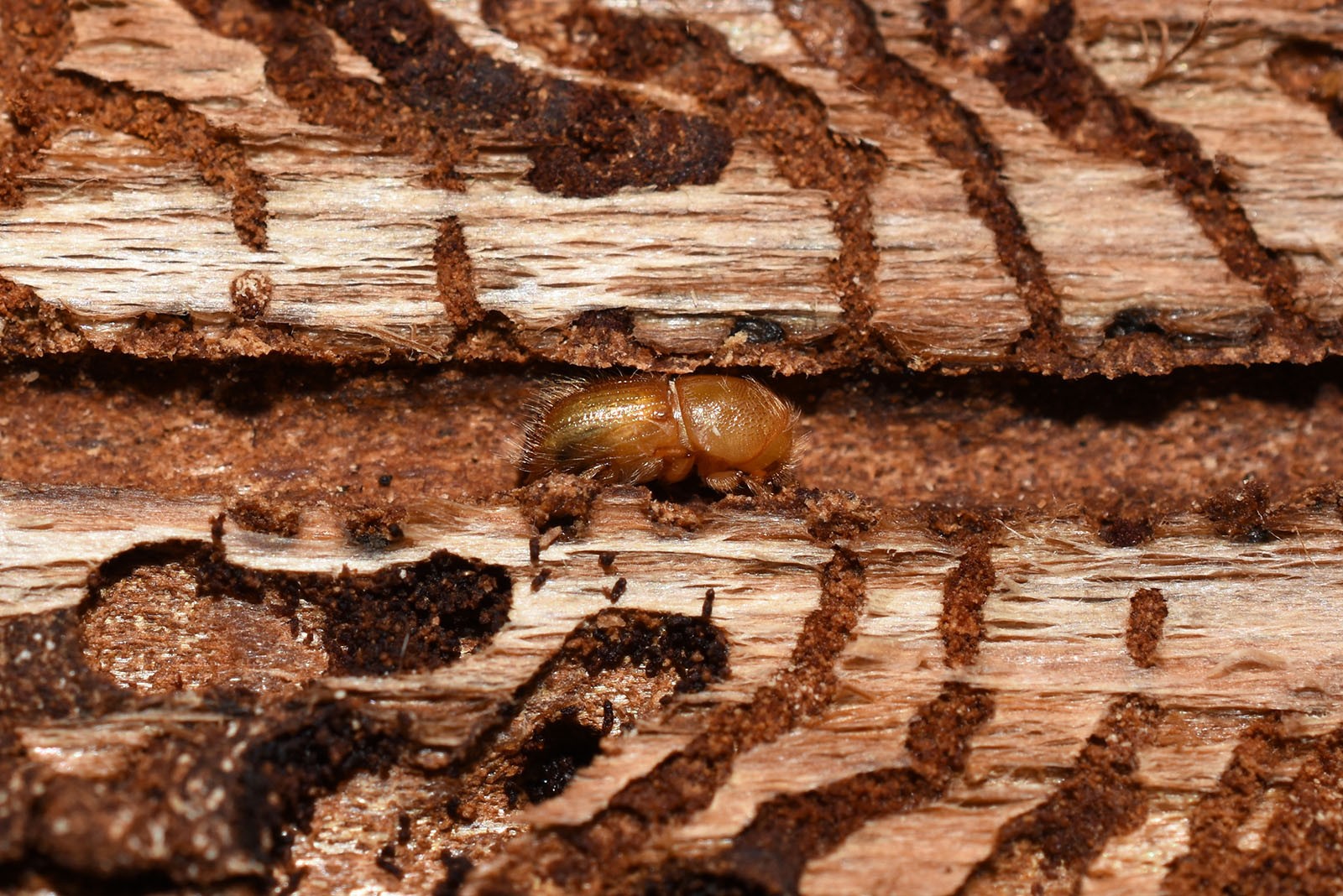 The European spruce bark beetle, which nestles under the bark of the European spruce, has been very active in the forests of the East Flemish Waasland during the past years. Due to the drought, the tree species has become less resistant to the pest while the beetle now flourishes, thanks to the heat.

The European spruce bark beetle, which nestles under the bark of the European spruce, has been very active in the forests of the East Flemish Waasland during the past years. Due to the drought, the tree species has become less resistant to the pest while the beetle now flourishes, thanks to the heat. The consequence is that many forests in the Waasland consisting of European spruce are now on the verge of destruction.

“It is very likely that new pests threatening other species will surface in the future,” Lander predicts. “But no one knows for sure who the next victim will be. In our research into ‘climate-adaptive forests’ we look into whether mixed forests, hosting a broad range of tree species, are better suited to the effects of climate change than a monoculture forest.”

In this way, ForNaLab aims to create future-proof forests. Kris: “Our experiments are large-scale; we’re planting different combinations of multiple tree species. We observe the thousands of planted trees and record their behaviour in great detail. In 2016, together with many other UGent’ers, we planted the two-hectare Ghent University climate forest in Melle, Belgium. At the site, we study the species density and the crown density of a mixed forest, which is important for the microclimate. Our largest research project FORBIO is spread across three sites in Belgium: in the West Flemish Zedelgem, Limburg’s Hechtel-Eksel and Gedinne in Namur. Every site is about 8 hectares in size with a total of 100.000 trees. We planted them in 2010.”

Pieter: “Together with colleagues at other universities, we are conducting about thirty similar experiments all over the world with more than a million trees. We analyse the difference between monoculture forests and mixed forests in times of climate change.”

These experiments are already showing results, says Haben: “Thus far, we have been able to conclude that planting more species leads to less die-off. Monoculture forests consisting of European spruce are doomed because of the drought. But if we plant the spruce together with five other plant species, the tree still has a chance of survival.”

Tweaking for a better world

ForNaLab has been playing an important role in this story from the beginning, Kris proudly mentions: “We at ForNaLab have coordinated this entire international network dubbed TreeDivNet from the start. This has allowed us to track the growth and behaviour of climate forests not only in Flanders, but also in Panama or Borneo. Due to attention the climate is getting internationally, there are strong signals coming from all over the globe in terms of reforestation – also from governments. But if that happens without the necessary expertise, they will run the risk of losing their young forests after a few years due to drought. Our research into climate-adaptive forests will help to avoid that scenario.” 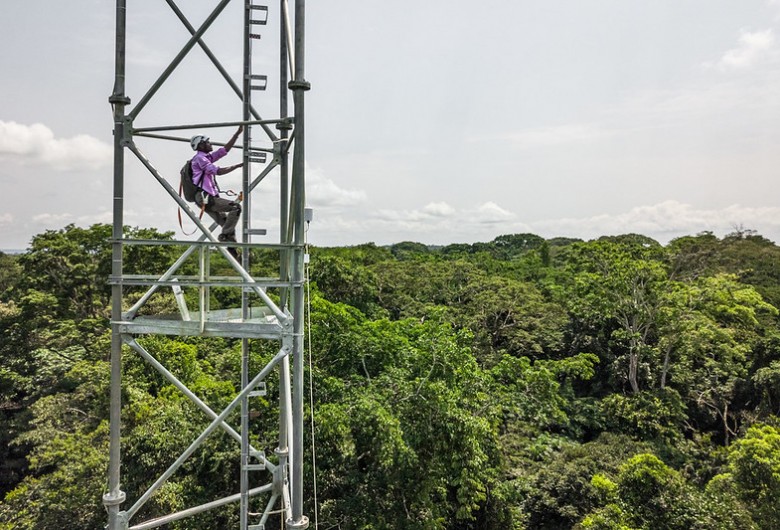 Deep in the Congolese rainforest stands a tower 57 metres high that is helping in the fight against climate change. Since October 2020, the Ghent University climate tower has been measuring both the amount of CO2 captured and stored by the tropical rainforest and the levels of water exchange between the forest and the atmosphere.

Their mission is clear and has become more relevant as a result of the drought. “Our knowledge can help forest managers to mitigate the impact of the effects of the changing climate as much as possible,” Pieter concludes. His colleagues agree. Haben: “We are working on developing landscapes that are both resilient and allow plant, species and animal mobility. A dynamic system such as this will be much better equipped to deal with shocks.” Lander adds, in closing: “bioengineers like us love to tweak environments to work towards a better world. Instead of throwing our hands up in despair, we’d rather get them dirty to get things done.”

ForNaLab’s research has been steadily drawing more attention the last few years due to the increase of climate change. Interest in Europe has grown too. This has translated into a portion of the research being funded by ERC Grants. Kris Verheyen: “ERC stands for European Research Council. This EU organisation promotes scientific research in Europe by offering grants to ‘excellent research by excellent researchers’. ERC Grants give research groups a generous budget, but also offer a boost in prestige. The chances of getting an ERC Grant are only 8 or 9 percent.”

What are the criteria for landing a grant like this? Kris Verheyen: “A good resumé is important. But above all, your research proposal has to be found to be innovative, creative and very solid.”

His fellow-researcher Hans Verbeeck elaborates: “They really are looking for ‘excellent researchers’. Your excellence is not primarily determined by simply counting your scientific publications, which is the method used by many other institutions that offer funding and grants. Rather, they look for people that have forged their own path. It’s important that you explain what your own independent contribution to the scientific research is in your research proposal or in your resumé. In fact, it really comes down to excellence being the only criterium.”

Autumn is the season for mushrooms – they are everywhere, and certainly growing in abundance in forests. But did you know that the mushrooms you see are just a very small part of a vast, gigantic, mainly subterranean network? And that without this network, other plants simply wouldn’t be able to survive?