What does steel production have to do with fish-food production? Everything! If you ask Myrsini Sakarika and Nele Ameloot from Ghent University. After all, they are helping to convert CO₂ from the steel manufacturer ArcelorMittal Belgium into proteins, which can then be used for fish food. Pioneering research, although some finetuning is still necessary: “Fish are pretty demanding when it comes to their diet.”

The project is a wonderful example of how research finds its way to business. In her laboratory, bio-engineer Myrsini Sakarika (department of Biotechnology) was able to transform the greenhouse gas CO₂ into ten grams of microbial protein. As a business developer, her colleague Nele Ameloot made appointments with two companies for a larger research project to consider the conversion of troublesome CO₂ into sustainable and delicious fish food. The companies in question? Steel manufacturer ArcelorMittal Belgium and a company that makes feed additives.

A sustainable alternative to soya

By why is that necessary? Vegetable proteins, such as soya, are becoming more popular in both human and animal food. They are considered a sustainable alternative to protein-rich meat. Most soya for human consumption is grown in Europe, yet soya for animal feed is less sustainable than it may first appear.

“Soya has become one of the most important ingredients in animal feed in our country”, says Myrsini. “However, it is imported in large quantities from countries like Brazil. For the creation of new soya plantations, large areas of Amazon forest are being chopped down. Also, the soya crop requires a huge amount of water, pesticides and fertilizer.”

This is where Myrsini’s research comes in. “Microbial protein does not have all those disadvantages. It is extracted from microbes or micro-organisms that contain plenty of protein in their cells. We are extracting our microbial protein from CO₂, a waste stream that is harmful to the environment. That makes it even more sustainable. There is no need to go to Brazil for it, as we can find plenty of our raw material in the port of Ghent, at ArcelorMittal Belgium.” 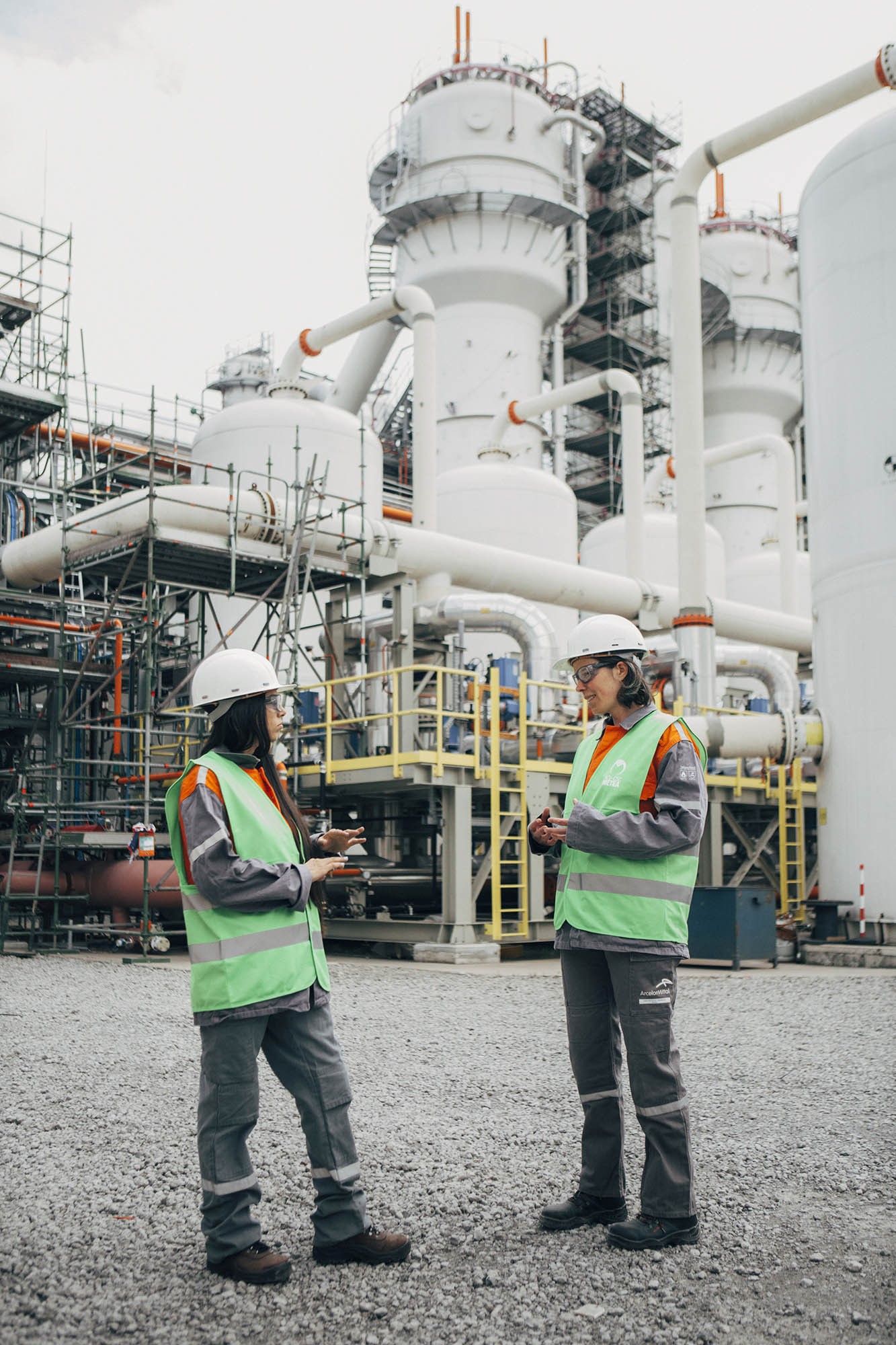 Can so much CO₂ be found at the steel manufacturer?

Myrsini Sakarika: “ArcelorMittal Belgium depends on the raw material iron ore for its steel production. All of the steps that follow produce an abundance of gas, of which mainly CO₂ and CO. The Ghent factory is one of the biggest sources of emissions in Flanders and therefore an ideal place to test out our new technology. Also, ArcelorMittal Belgium does not wish to ignore its significant responsibility in achieving the climate objectives.”

Therefore, it is both in our own and ArcelorMittal Belgium’s interest to reuse that CO₂ for sustainable purposes?

Myrsini: “That’s right. The steel manufacturer is already committed to giving as much CO₂ as possible a ‘second life’. They are busy expanding Steelanol, a factory where they convert CO₂ and CO from the industrial gases into sustainable ethanol. They capture the gas that is released during the steel production, send it through a reactor and, in doing so, ‘feed’ it to micro-organisms, which turn it into sustainable ethanol.

The way I am saying it now makes it seem very simple, but that is not the case. In fact, all kinds of intermediate steps are necessary for CO₂ and CO to become pure ethanol. Our procedure to convert CO₂ into protein for fish food is not a simple one either. However, in our lab we have demonstrated that it is equally worthwhile.”

Nele Ameloot: “We are now busy scaling up the process that Myrsini and her colleagues are developing. If that scale-up goes well, we want to build a factory with bioreactors to produce microbial protein from CO₂, right next to Steelanol.” 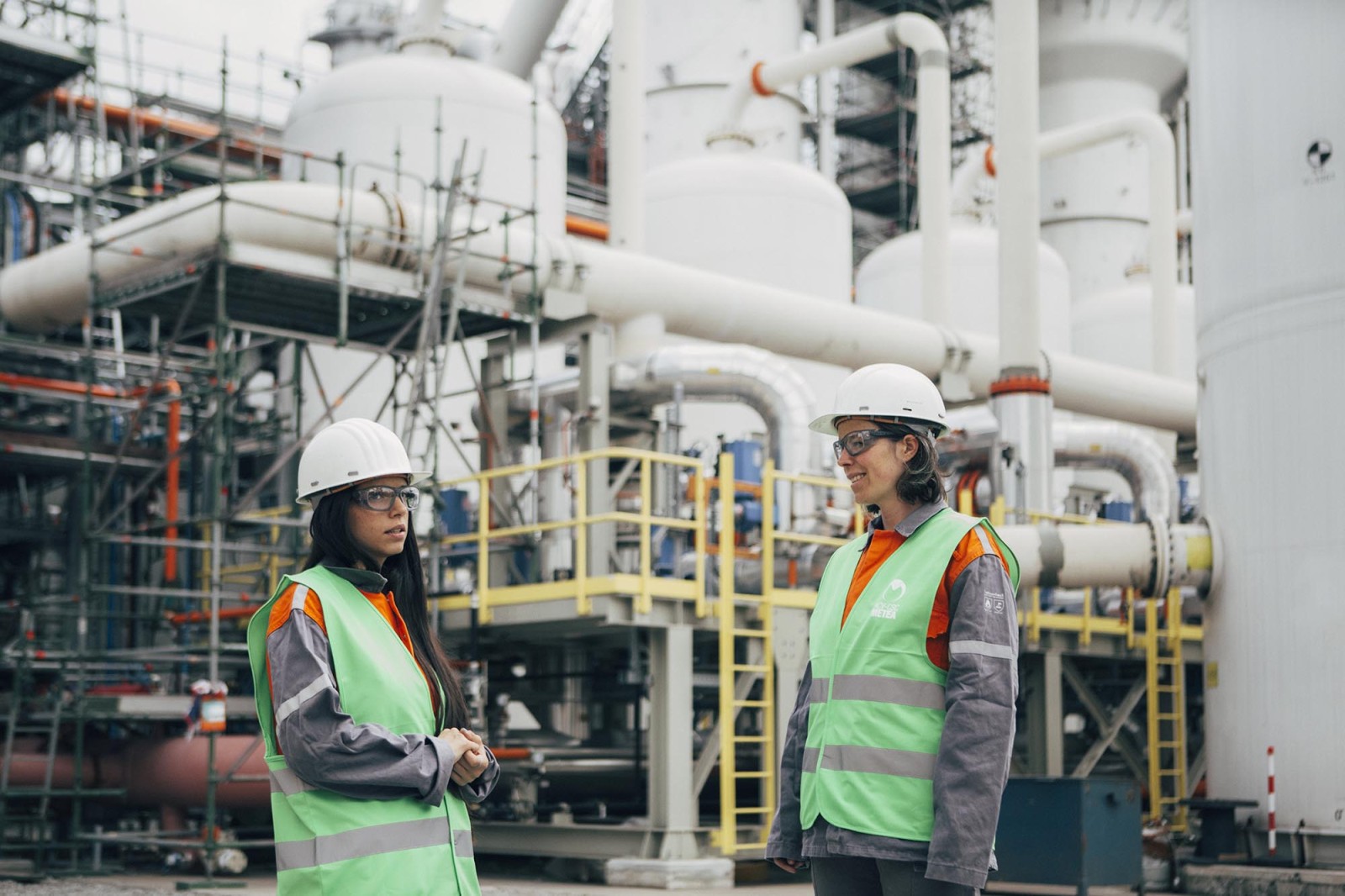 How revolutionary is the idea and technology to extract protein from micro-organisms?

Myrsini: “In the seventies, people became increasingly worried about the risk of food shortages. It felt as if food production would never keep up in feeding the world’s fast-growing population. Because of that, ways were sought in which to boost food production. This was when the procedure to turn micro-organisms into protein was discovered. The companies concerned at the time used products from the petrochemical industry as their food basis. We are using CO₂, a greenhouse gas. That is very innovative.”

Why are you using the protein extracted from CO₂ specifically for fish food?

Nele: “A huge amount of fish food is needed to cultivate salmon, trout or shrimps. This is currently produced by grinding down masses of sea creatures caught in the ocean. This process is totally unsustainable and puts enormous pressure on marine biodiversity. Our fish food will be much more sustainable. On top of that, our production process uses different micro-organisms. Similar procedures use only one. Our end product, the fish food, will comprise up to 75% protein. Furthermore, the composition is ideal for fish farming. All thanks to the brand-new patented technology from Myrsini and her colleagues. In fact, it can also be used to produce pig feed and cattle feed, anything as long as it’s protein.”

So it is also suitable for producing food for human consumption?

Myrsini: “The legislation relating to the production of human food is very strict, and quite right too. The production process will therefore have to be modified in order to guarantee its safety. That is very complex, which is why we are currently focusing our efforts on fish food. Meanwhile, we have become very good at that. The nutritional values of our proteins are very high. They are therefore well suited to fish, since they can be rather choosy when it comes to their diet.” 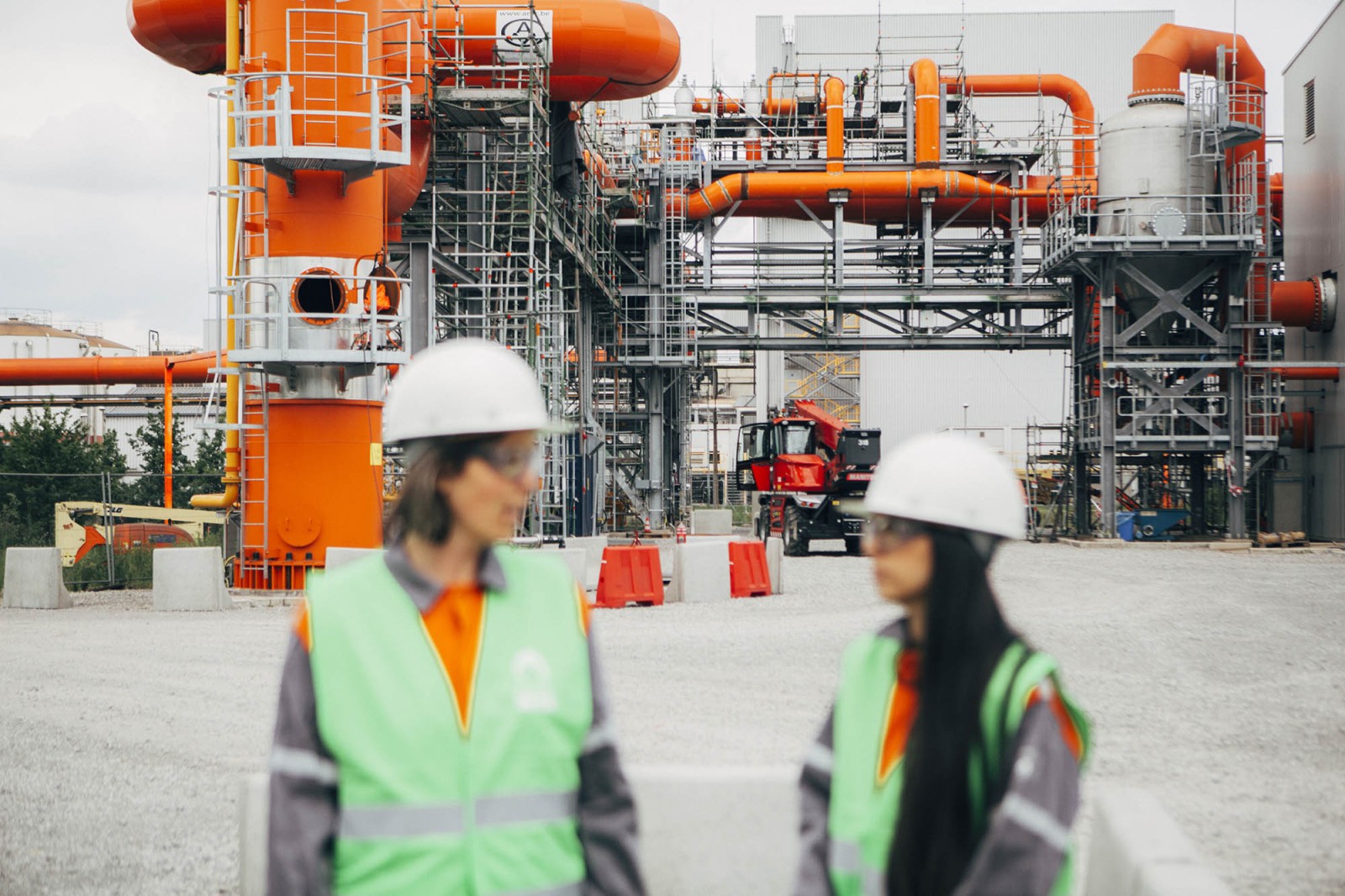 You are now the unusual link between a steel manufacturer, ArcelorMittal Belgium, and a food additive producer?

Nele: “Indeed, we are the link in what appears to be a rather strange combination. (laughs) As a university we were already collaborating closely with those companies. We put them in touch originally, which was already quite a challenge, since they speak two different languages. However, the people working there are smart and immediately saw the potential.

We are receiving subsidies from the Flemish government for this sustainable chemicals project. They have a protein strategy and put money aside to support it. The Ghent area is actually unique in its research and development of microbial protein. We have teamed up in The ProteInn Club and in doing so are promoting proteins based on micro-organisms. Thanks to the subsidies, we are now going to launch our first scale-up.”

Is there a big difference between a lab arrangement and production on an industrial scale?

Nele: “There certainly is, and even after our first scale-up we won’t yet be in a position to reach the large industrial scale. We are now going from five litres to 1,500 litres and moving from the lab to a semi-industrial site. For the moment, our end product resembles powder, which fish do not find sufficiently attractive. The feed additive manufacturer possesses all the knowledge and experience to turn our proteins into a tasty treat for fish.”

Methane is also ideal for conversion into protein

“For some time now, the Center for Microbial Ecology and Technology (CMET) at Ghent University has been looking for interesting components with which to produce microbial proteins”, says bio-engineer Norah Benmeridja. “That’s how biogas methane ended up in the picture. As a doctoral student I am investigating the conversion of these into protein.”

Methane is a greenhouse gas, just like CO₂. “The objective is to transform methane into a valuable and sustainable product. Methane is created during the fermentation of, e.g., vegetable waste, such as potato peelings on the compost pile. From this biogas we want to create something edible. In doing so, we are taking a diversion in order to turn waste into a protein-rich source.”

So these proteins can then become a component in animal food, such as fish food, but also in human food? “For sure. Our research is still in the laboratory phase. In the meantime, we know exactly which micro-organisms we need to convert methane into protein. We also already have a prototype of several grams of protein in powder form.”

The theory works in practice. “We too are making preparations to scale up. We are increasing the size of our bioreactors and, next year, we plan to do tests with fish food based on microbial protein.” Are there already any deals with industry? “Not yet, but there is enormous interest.” 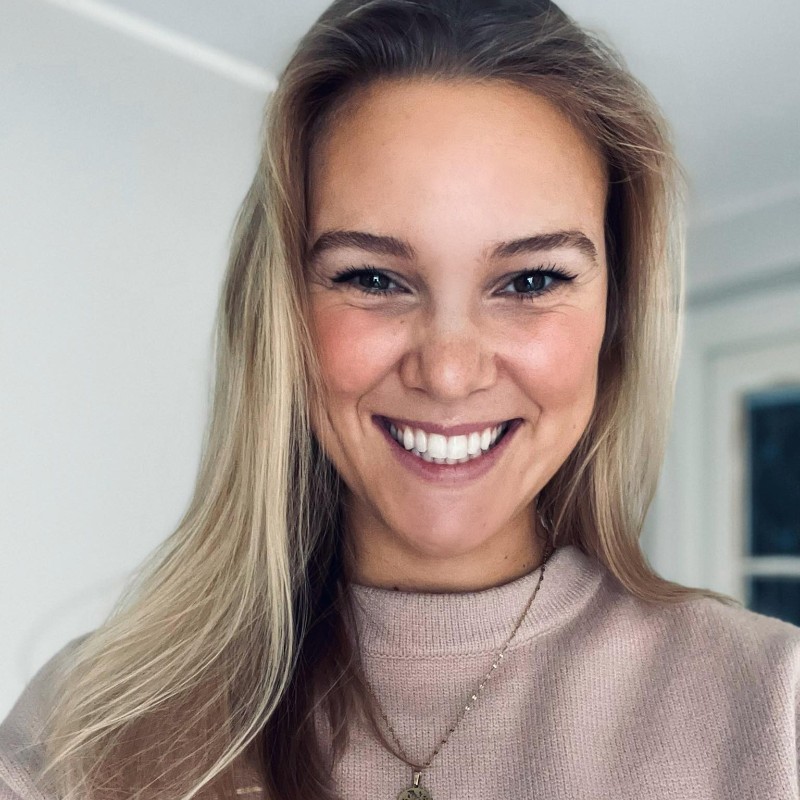 “For some time now, the Center for Microbial Ecology and Technology (CMET) at Ghent University has been looking for interesting components with which to produce microbial proteins. That’s how biogas methane ended up in the picture. As a doctoral student I am investigating the conversion of these into protein", says bio-engineer Norah Benmeridja.

International top recognition for researcher who is combating ‘hidden’ hunger

From now on, Professor Dominique Van Der Straeten can call herself a fellow of the prestigious American Association for the Advancement of Science (AAAS). This international recognition honours researchers who are making an invaluable contribution to science and its application. In the case of professor Van Der Straeten, it recognises her research, which aims to reduce ‘hidden’ hunger and the consequences of climate change.

The CO₂-neutral future is feasible if you ask Marten

We are bombarded with news about energy measures. Even so, there is a yawning gap between the paths defined and what people actually do.