Brain research in Rwanda: how peaceable are citizens after a genocide?

Nearly 30 years ago, Rwanda went through a particularly brutal genocide. The perpetrators were soldiers, but also regular citizens: colleagues, neighbours, family members… Today, we assume that both perpetrators and victims live side-by-side peacefully. But is this really the case? Ghent University researcher Emilie Caspar was the first neuroscientist ever to conduct research into both groups locally. And she saw that they both still felt little empathy towards each other. 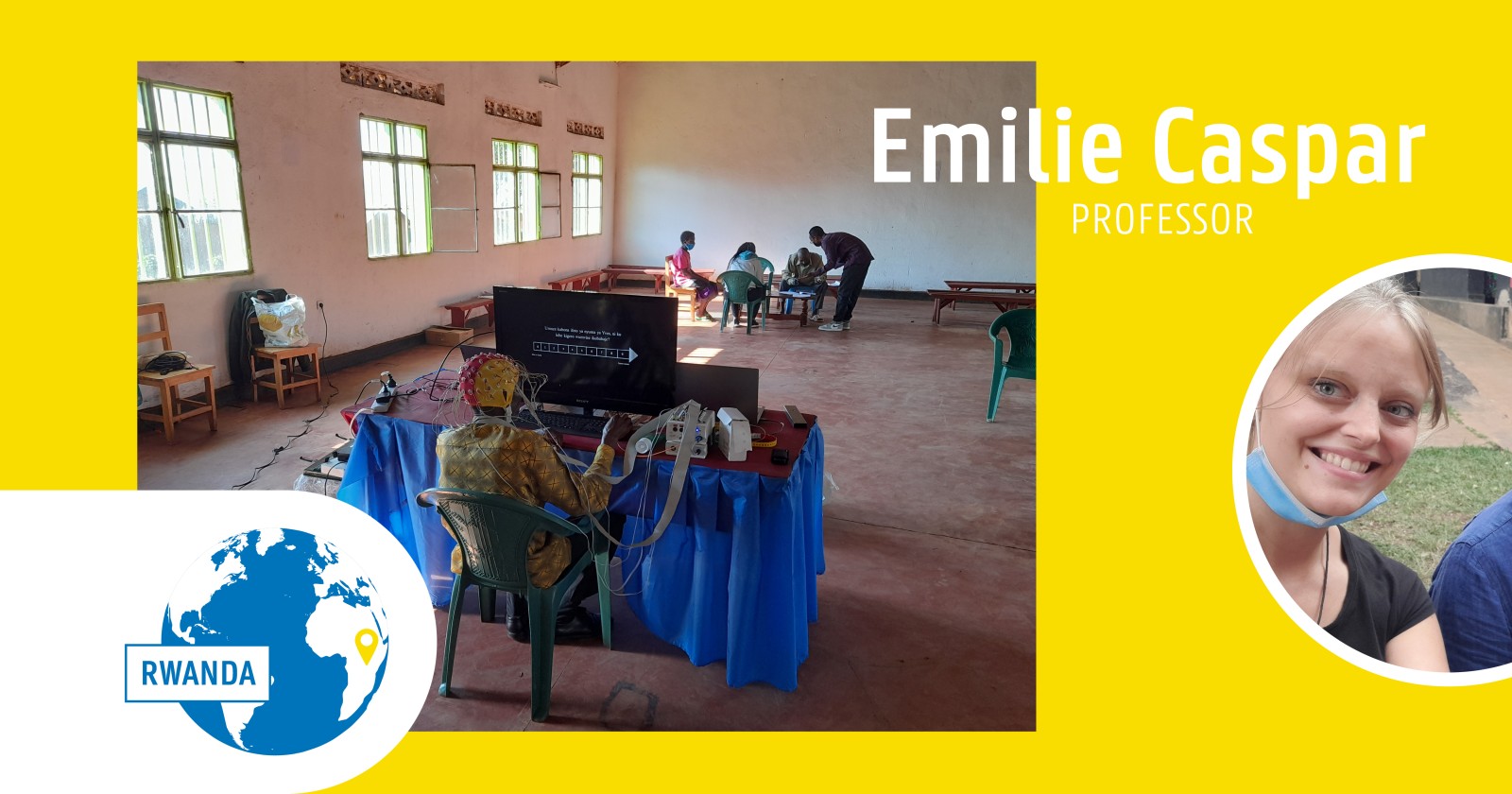 “We’re inclined to show less empathy towards people from other groups,” Professor Emilie Caspar starts to explain. “We call this the Intergroup Empathy Bias, and it’s a well-known phenomenon. Now, however, we noticed that the bias between both groups was still strong after all these years. What is more: we saw that the lack of empathy transferred to the next generation, who had not experienced the genocide directly.”

On the road in Rwanda with an EEG

To conduct her research, Emilie went to Rwanda. This is exceptional, especially for a neuroscientist. The bulk of her colleagues focus on the brain in the western world. Mostly, they do this for practical reasons: research in less developed countries requires certain adaptations.

Emilie, too, encountered the occasional roadblock. “I would have preferred to work with an MRI scanner because they’re able to visualise brain activity in great detail,” she says, by way of example. “But, in practice, this would have been impossible: in Rwanda, MRI scanners are only found in Kigali and may only be used in a medical context.”

But she wasn’t going to be stopped by this: out of necessity, she utilised an EEG scanner for her brain research. “Because how can we hope to fundamentally understand mankind if we only ever analyse brains in a western context? For my research, I couldn’t simply study the brains of Rwandans in Belgium. Simply said, it was necessary for me to go to Rwanda myself.”

An EEG measures electrical brain activity using electrodes placed along the scalp. “When experiencing empathy, our brain registers other people’s pain in the same way as it registers pain in our own body,” she explains. “This makes it easy to measure. Thankfully, studies show that a scalp EEG also delivers good results.”

Less empathy as an explanation for atrocities?

Her brain scans showed that perpetrators showed less empathy towards victims, and vice-versa. To their children as well. “This is an important finding, because it’s a possible explanation for why groups tend to repeatedly commit atrocities on each other over time,” says Emilie.

The handy thing about a scalp EEG is that it’s very mobile. This was very important to Emilie since both perpetrators- and victims of genocide didn’t all live in the capital. On the contrary. “We travelled to a different village every day. This brought us to some very rural locations,” Emilie explains. It didn’t make her research any easier: people there often lived in mud huts and had no electricity, which she needed to conduct her research.

Winning over the locals

“For this reason, we usually set up in churches or cafés,” she continues. “And then we still had to convince them that these kinds of brain scans were entirely harmless. They didn’t really trust the EEG. For example, they were scared that it could read their mind. This makes sense: most of them had never even seen a keyboard up close in their entire lives, so they had very little knowledge of technology.”

To gain their trust, she got the help of Prison Fellowship Rwanda, a local organisation dedicated to helping ex-convicts rebuild their life. “The local population knew them and trusted them. They helped us recruit participants. Without them, it would never have worked.”

In the meantime, her research in Rwanda hasn’t finished yet, on the contrary. Emilie: “I want to understand why some citizens follow orders, even though it leads them to committing terrible acts, and other don’t. How much does the feeling of empathy influence this behaviour? In addition to this, there’s also the case of ‘les justes’, the group of people who risked their lives by helping Tutsis and moderate Hutus go into hiding, in the same way resistance fighters did during the Second World War. What drives them?”

Choosing Rwanda as a focus for her research was no coincidence. “What is unique here, is that quite some time has passed since the genocide took place. In countries such as China or Turkey, genocides are still going on. Politically, this makes it a very sensitive subject. The governments there are not receptive to this kind of research at all, unlike the Rwandan one. Besides this, survivors are still alive and perpetrators and survivors live side-by-side. This isn’t the case for the Holocaust, for example.”

Afterwards, Emilie is going to Cambodia. A genocide took place there during the 1970s, about twenty years before the one in Rwanda. “That time difference is interesting: how much does the trauma from genocide still influence both groups today, after such a long time? And how do their descendants view each other?” In this way, she wants to try to understand whether or not it’s part of human nature to repeat atrocities from the past.

Today, Emilie works closely with a number of different NGOs that help citizens recognise hatred and violence, such as Radio La Benevolencija or Prison Fellowship Rwanda. Soon, she plans to start helping to develop educational programmes that focus on the prevention of large-scale violence following authoritarian orders – to help prevent future genocides.

Emilie Caspar was previously affiliated as a researcher with the ULB, University College London and the Dutch Institute for Neuroscientists. She’s the 100th ERC grantee at Ghent University. Three days after her appointment as professor at Ghent University, she commissioned a tattoo of a nervous system on her neck. It was something she had promised herself during her studies that she would do if she was ever tenured academically.

Do you fall in love more quickly in the summer?

“Summer lovin', had me a blast. Summer lovin', happened so fast.” Danny and Sandy felt it already in the classic film Grease: during the summer there is love in the air. But is there any truth in it? Do we fall in love more quickly in the summer?