How (un)healthy is worrying?

We all worry from time to time. It can even be good to clear the head, says professor Ernst Koster (department of Experimental Clinical and Health Psychology). However, it can also get out of hand.

How would you define worrying?

‘The heart of it is: repetitive contemplation of problems or negative issues. On the one hand, there’s anxiety, which typically concerns the future: What if my boss finds out that I’ve made a mistake, what if something happens to my children? On the other hand, there’s more depressive worrying, which focuses on reviewing the past: How come my relationship failed, why did it have to happen to me? The two forms of worrying are also interlinked. There’s no clear divide: anxiety and depressive worrying frequently go hand in hand.’

So, worrying is something negative?

‘Not in itself, in fact. Worrying can be a very logical response to a problem. It can even motivate you to do something about it. People who never worry, and never stop and think lack self-reflection. Donald Trump is an example who comes spontaneously to mind (laughs). And if you’ve done something wrong and never have negative thoughts about it you are on the rocky road to becoming a psychopath. So, a certain amount of worrying is a completely normal process. It helps you to consider mistakes so that these can be avoided in the future, or to recognise and anticipate threats. However, it can get out of hand. Causing rumination: continuously going over and over something, a constant focus on negativity, without taking the steps required to resolve your problems. Causing you to think things like: What if I always feel so down. This actually stops you from making changes.’

Why do you actually conduct research on worrying?

‘Worrying is one of the risk factors in anxiety disorders and depression, particularly for those who are unable to stop. This is the area in which we are conducting fundamental research. We are investigating people’s cognitive behaviour, or how they think. How do people consider the future, how do their brains process information? How do they focus their attention on their environment, how do they interpret what they see and experience, can they control the way in which they think? Therefore, our studies concern not only the content, but also the actual thought process. Depression is an important element in our research. However, worrying also occurs in those without a clinical depression. It can affect the quality of these people’s lives too. So, this is what we are now researching.’

Are some people more prone to worrying?

‘Yes, it is certainly true that, for some people, worry is the default option. Worrying is then a very common trait. It is often connected with the specific situation in which someone finds themself. Those involved in a divorce will naturally worry more. This is simply a logical response to events, just like depression can also be a logical reaction to a very difficult situation.

We recently began researching people who suddenly found themselves out of work. Faced with such circumstances, you start to consider your identity, your financial situation, etc. Among other things we aim to establish whether we can predict who will react more or less constructively to this kind of challenging situation. Who tends to disappear into their negative thoughts? Who develops a certain level of cognitive control to put an end to such negative thoughts? After failing twice in a job application, some people already think, there’s no point, I won’t find anything anyway. While others may think: This is a rotten situation, but maybe also an opportunity to reinvent myself.

The research has only just begun – so I can’t add much at this point. However, the intention is to define predictive elements which determine whether or not someone can cope constructively with stress factors. In other words: which mechanisms allow some people to stop worrying?’

Do you already have an idea?

‘You can imagine several very general strategies to ensure that worrying does not take over. One important distinction is, for example, abstract versus specific thought. Worrying’s a way of stopping to consider annoying situations and learning from your mistakes. But this requires quite specific thoughts. Take a divorce, for example. You can think: This is awful, why did this have to happen to me, I never wanted this. When thinking such thoughts there is little that can help you change your approach in the future. However, you can also think: What could I have done differently? How can I make sure that I never end up here again?' 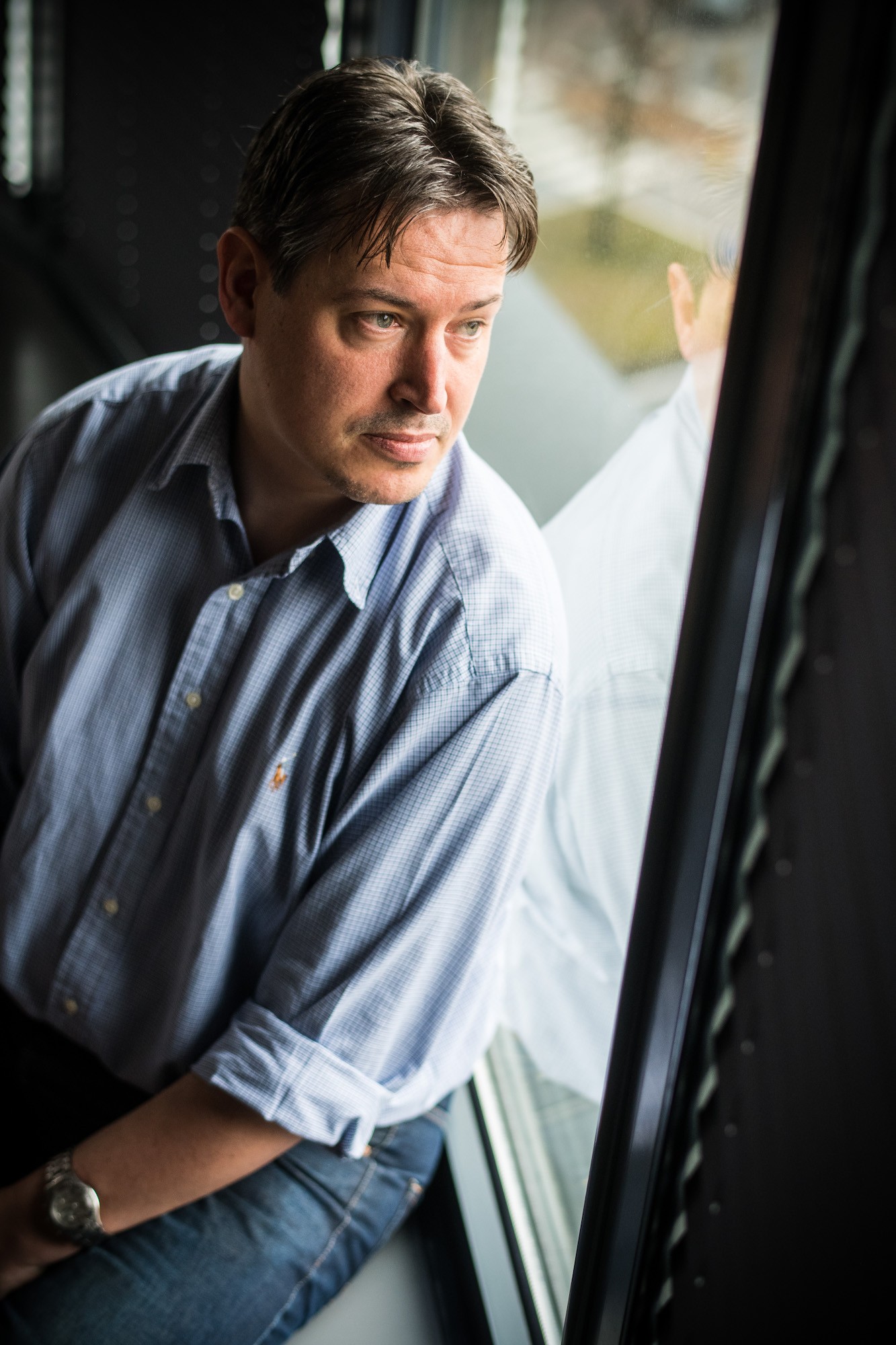 A second distinction is thinking about your emotions. Is there a difference or not? Thinking that you feel rotten hardly helps in achieving a better analysis. However, you can also differentiate: I feel alone, let down, perhaps also a little disappointed in myself. From this basis, you can think in a much more focused manner about what you can do about it. For example, if you feel alone, then you can meet up more regularly with friends.

Finally: research has frequently demonstrated the importance of the perspective from which you see yourself. There is a natural tendency to think about yourself in the first person. However, you can also choose to think about yourself in the third person. Doing so creates more distance, which improves your analysis of the situation. This also helps to tame the negative emotions and think in more of a problem-solving manner.’

All easier said than done!

‘That may be. However, a certain amount of awareness is required, and particularly for those who are troubled by excessive worry: when do I lose myself in problematic thinking patterns? From there, you can start to manage things differently. But it’s true to say that it takes more than that.

A first step is to build awareness of the way in which you focus your attention. Training can help to make you aware of how you focus on your environment. This process is fundamental to how you feel. The classic example is when making a speech to colleagues. As you talk, you often receive very ambiguous information. One colleague seems positive, another negative. If you’re more sensitive to negative input, you’ll tend to watch only the negative colleagues. Then you think: he probably doesn’t find what I’m saying very useful. Making you uncertain and nervous, and effectively causing your speech to become less meaningful. And this is also what you remember afterwards.

In other words: processes in the initial acquisition of information can affect our later memories. The idea is to tackle such processes early on with very specific training. In doing so, you learn to direct your attention more quickly towards positive things and you become more conscious of the way in which you process information.’

One colleague seems positive, another negative. If you’re more sensitive to negative input, you’ll tend to watch only the negative colleagues.
Ernst Koster

How does it work?

‘Our research includes showing people sets of words on a computer screen. By monitoring eye movement, we notice that some people automatically continue looking at the words with a negative connotation, even when they are asked to form a positive sentence. However, by lighting up the positive words when they look at them, we were able to reduce this negative tendency. In this way, they were able to escape the vicious circle.

Of course, such a computer program alone will not stop you from suffering depression. However, it’s an exercise that’s easily managed online and which can be a valuable addition to traditional psychotherapeutic treatment. In any case, people with depression often have concentration and memory disorders. This means they can find it hard to absorb verbal information – which is effectively the essence of psychotherapy. If you can transform the habit of worrying, for example, with targeted interventions like our computer training, you see that those tested become more open to positive or new information. This can help in improving the results of psychotherapy.

Another training which seems effective, is memory training. This involves putting tremendous strain on the memories of our test subjects. They must carry out tasks in which their working memory is required to absorb information very quickly. For as long as they can concentrate on this task, we see their worries decrease. And the effects remain: even three months after the training, this group appeared to worry less than the control group who received no training.’

‘Not in the sense that we must all now sign up for computer training. However, our research is very promising for a number of vulnerable groups. Including those who’ve already suffered depression, with a higher risk of further depression. These people also tend to worry more. Our computer training seems to be beneficial to them.’

How do our surroundings influence our health?

Feminism: more than a gender discussion?