Antibiotic resistance as a new pandemic? Can a virus save us?

We live in the post-antibiotic era. At least that’s what the World Health Organization (WHO) says. And not without foundation — it suggests some ten million people will die annually from antibiotic-resistant bacteria by 2050 if we don’t act now. Furthermore, there are more cancers than now. And so it is a feverish search for alternatives. Ghent University researchers have already come up with a promising breakthrough.

Central to the research are lysines, these are enzymes that destroy bacteria by cutting the cell wall to pieces. In an instant. “You could describe them as the fastest acting antibiotic ever,” says Professor Yves Briers. He leads the research group and together with his team has a clear mission: to make lysines real medicines. Antibiotics based on enzymes, also called enzyme antibiotics.

“We have a technique, VersaTile, that makes it easier to take the steps needed to get to clinical testing,” he says. In concrete terms, this technique makes it possible to assemble lysines at lightning speed. In this way, an adapted lysine or enzyme biotic can quickly and efficiently be made for every possible bacterial infection, including those bacteria where traditional antibiotics no longer work. “Lysines have the potential to become a new generation of antibiotics,” say researchers Hans Gerstmans and Dennis Grimon, who are part of VersaTile.

It is urgent that a new generation of antibiotics is developed, as super bacteria threaten — quite literally — the entire population of the world. More and more bacterial species are developing resistance to several or even all antibiotics (see timeline). Even a simple bronchitis is becoming deadly again. According to WHO, we are already in a post-antibiotic era. The latest figures are dramatic: there are already 33,000 deaths in Europe every year as a result of infections with resistant bacteria. (Source European Center for Disease Prevention and Control, ECDC).

In addition, antibiotic resistance also appears to play a role in some corona deaths. The coronavirus first weakens patients, after which secondary bacterial infections in the hospital make treatment even more difficult and the risk of death increases. Further research is needed, but the need for effective antibiotics is vital here too.

“We are currently losing the battle against bacteria. We are facing the perfect storm,” says Professor Briers. “There is already a high degree of multi-drug resistance (MDR), that is bacteria that are resistant to multiple antibiotics. But it is increasingly evolving towards XDR, or extensive drug resistant and even pan-drug resistant (PDR).” In other words: bacteria that cannot be treated with any antibiotic. “The first cases relating to PDR are already out there.”

After World War II, there did not seem to be any bacterial infection that antibiotics could not fight. Penicillin, discovered in 1928, worked miracles on the many war victims. Wounds that were infected and that often lead to death would heal quickly. The medical world was blinded by its efficiency. Patients even asked for antibiotics for viral infections such as colds, although they are of no use at all. Irrational use fueled resistance. “Some bacteria have genes that make them more resistant to antibiotics. With incomplete or incorrect treatment, these stronger bacteria remain and pass on their ‘better’ genes to the next generation. And so it becomes a bit more resistant,” explains Professor Briers.

The longer the process continues, the greater the consequences. Already in 1947 penicillin no longer worked against certain bacteria. Now, more than 70 years later, there are only a few options left, according to Professor Briers. “These are the antibiotics of last resort. Yes, we are literally talking about antibiotics that have only been used in very specific circumstances — as a last resort.” 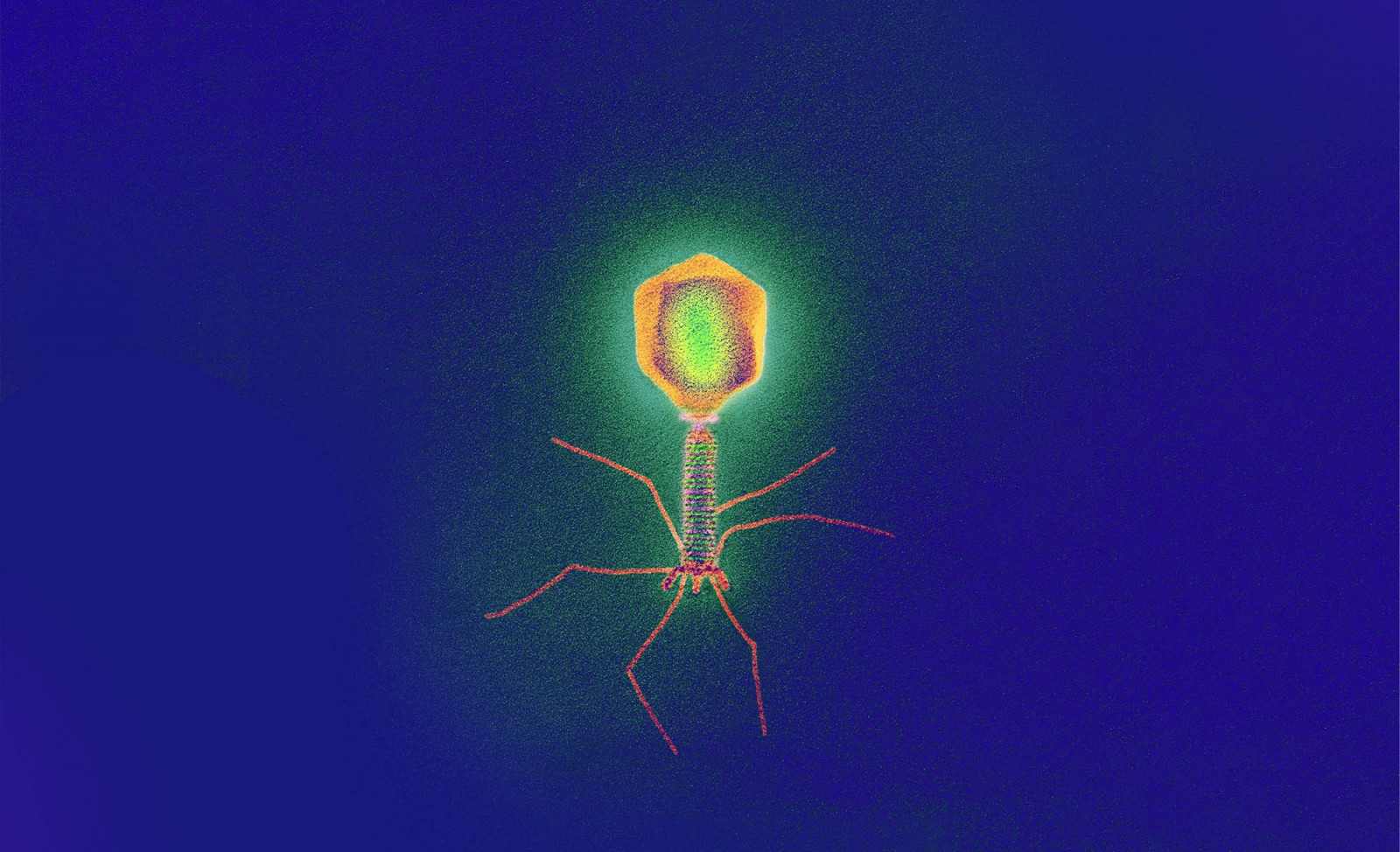 And yet, even before the discovery of penicillin, a promising alternative already existed. In 1917, the French-Canadian microbiologist Felix d'Herelle talked about an invisible microbe, a virus that parasitizes bacteria. He called it bacteriophage, a contraction of bacteria and the Greek phagein, or food. In short: bacterium eaters.

Initially there was a lot of enthusiasm about the medical potential of phages. Except there was a major drawback: phages are bacterial strain-specific. One specific phage can only destroy a few specific strains of bacteria. Gerstmans explains why phages quickly disappeared under the radar in the Western world: “Most antibiotics work like an atomic bomb by comparison: they attack almost all bacteria and are thus more efficient and easier to use. Moreover, the production of antibiotics was much easier than that of bacteriophages.”

Now that the resistance problem is becoming increasingly acute, this is about to change. Professor Briers’ research group is studying phages as a possible alternative to antibiotics. The main focus is on the ultimate weapon that phages use against bacteria: lysines. “You can imagine them as scissors,” says Gerstmans. “When bacteriophages attack bacteria, they invade the bacteria. There they multiply until the bacteria are bursting with it. At the end of that process, the new phages want to break out and for this they use lysines. They cut the cell wall from within, causing the bacteria to burst open and the phages to spread out to infect other bacteria.”

Biotechnology makes it possible to isolate and produce lysines on a large scale. “They consist of one consistent molecule that works on the entire bacterial species and not just on one strain. This means they are not as specific as bacteriophages are and they also meet the definition of a pharmaceutical product”, says Gerstmans.

But the biggest advantage lies in the ‘manipulability’ of the lysines. Professor Briers continues: “They consist of different components, let’s call them blocks. Each block contributes something, such as efficiency or speed. We have seen that we can play with those blocks, as we can with Lego. You can modulate them by rearranging the order. Or make other combinations. This way you can change, improve and adapt the properties of a lysine in function of the treatment.”

“In this way we can create ‘banks’ of lysines that we know work against certain bacteria. If a patient is infected with one of those bacteria, it is a matter of using the correct variant from the ‘bank’.”

Except there’s one problem: adjusting that normally takes a lot of time. Until now.

“The unique thing about our research is that we have managed to implement these adjustments very quickly and on a large scale. Now we can make millions of variants in a few days, and even make combinations that do not occur in nature. In just a few days it is possible to tailor a medicine,” says Dennis Grimon, who was involved in the development of the new technique from the very beginning. He’s talking about a milestone. “It could be a breakthrough in the field, an accelerator. But this technique will also be of great use in treatments, precisely because we can switch so quickly. Except this personalized approach is ahead of what is possible within the current regulatory framework,” he mentions the most important hurdle facing lysine research today.

Nevertheless, the idea that this is a “breakthrough” is real. The team proved this by making an enzyme biotic for the Iraqibacter: a multi-drug resistant bacterium that caused many wound infections during the war in Iraq. Meanwhile, an American study is also underway that has made it to the final phase of clinical testing with lysines. It is a specific treatment for endocarditis, an infection of the heart valves and bloodstream infections that are often fatal. The FDA (US Food and Drug Administration) is talking about a “breakthrough therapy”, a label they give to new, promising treatments to speed up clinical research and the approval process,” Professor Briers emphasizes the potential of these enzymes.

Will the era of antibiotics be over soon? The researchers are united on this: “No. Antibiotics will always be needed. We are probably moving to a scenario where both treatments will co-exist or be used together. Many infections involve a combination of bacteria. Sometimes you do not know exactly which one you are fighting against and often time is short. There the atomic bomb effect of antibiotics is needed. But if there is a little more time, you can check exactly what is going on and either use an existing lysine or tailor one”, says Gerstmans. Professor Briers sees another advantage: “It seems that resistance decreases if we fight bacteria with enzymes and can therefore use antibiotics more sparingly. Bacteria no longer have to constantly arm themselves against antibiotics, which means that they also turn off their defences.”

There is still a long way to go before that happens. The next step now is to get as many lysines as possible into the clinical trial pipeline. These are tests that can easily take more than five years. Despite this, Professor Briers is optimistic: “Companies like Pfizer are showing interest and are starting up research. I am very hopeful that we will one day use lysines as a therapeutic product.”

And so Gerstmans does not seem to be so wrong when he talks about “a new generation of antibiotics.”

Do your fingers turn white when the weather turns colder? It may be a pain, but it’s not (always) a cause for concern

Around one in every ten people suffers from fingers that turn completely white when exposed to cold weather. This condition is known as Raynaud’s phenomenon, and thankfully, it‘s (mostly) nothing to worry about.

Tapering off antidepressants no easy matter

1.22 million Belgians take antidepressants daily. That’s more than 1 out of every 10 people in the entire population. What’s remarkable is that many continue to take the pills for years. Tapering off is recommended, but hardly any research has been done into how one best goes about it. General practitioner and clinical pharmacologist Ellen Van Leeuwen thinks there is an urgent need to invest in helping people discontinue the use of antidepressants.

The signs coming from our bedrooms are far from positive: between fifteen and twenty per cent of adults suffer from chronic sleeping problems. And Covid has only made things worse. The impact it has had on our bodies and minds cannot be underestimated. But the good news is: you can train your sleep.