“Some time ago, Mieke told me that only 16 professors were active at Ghent University during its founding year 1817. There are just as many working at the Global Campus right now. I can’t wait to see what things will look like in 200 years’ time,” Campus President Han jokes. Collaboration between the Global Campus in South Korea and the Home Campus in Ghent today seems part and parcel of Ghent University life, but how did it come about that South Korea chose to partner with a Belgian university?

Vice Rector Van Herreweghe explains: “The two countries actually have a very warm relationship. Initially, I was a bit surprised by how many South Koreans even knew about the mere existence of Belgium. But during a stay in Incheon, where GUGC is located, it was explained to me during a taxi ride. Upon hearing where I was from, our driver got very excited. He explained that he held Belgians in the highest regard because we helped them during the Korean War in the fifties. Belgium sent a battalion of more than 3000 men, many of whom died on the battlefield. Today, this war has been somewhat forgotten by most Belgians, but it is still very much a part of the South Korean national narrative.”

“The war, indeed, still plays a large role in the South Korean consciousness, not only with regard to their relationship with Belgium,” Campus President Han responds. “The generation of my father grew up in a country which had been razed to the ground. Literally everything had to be rebuilt from scratch. In a situation like that, you can’t afford to argue about everything endlessly. This has become such a typical part of our culture that South Koreans are often greeted with pali pali! (“Quick! Quick!”) in other Asian countries. However, this has unmistakably resulted in South Korea becoming one of the most prosperous countries in Asia in less than 50 years.”

The South Korean spirit of entrepreneurship has led to them undertaking megaprojects that would be impossible elsewhere. “The Incheon city planners have accomplished a number of very impressive feats,” states Rector Van de Walle. “They built the Incheon Bridge, a structure spanning more than 21 kilometres over sea, in only 4 years. Songdo, the Incheon district in which GUGC was built, was just a stretch of open water 20 years ago. They reclaimed the entire area from the sea and built a hi-tech city district there. Of course, due to their faith in technology, Songdo can also feel a bit artificial to Europeans. But, on the other hand, during the same time span in Belgium they weren’t even able to finish the Oosterweel Link, a construction project first proposed in ’96,” he says with a deep sigh.

Rector Van de Walle concludes that “South Korea actively looks for international educational and research collaborations. Due to the good Belgian-South Korean relations and their formidable spirit of enterprise, it is almost self-evident that they asked Ghent University to become a partner in the Global Campus Project.”

"In 2009, the National University of Incheon in South Korea proposed a bold plan to start a communal campus in Songdo with the backing of the South Korean government. I had worked with Ghent University before and I thought it would be a good idea to involve them in the project."
Campus president Taejun Han 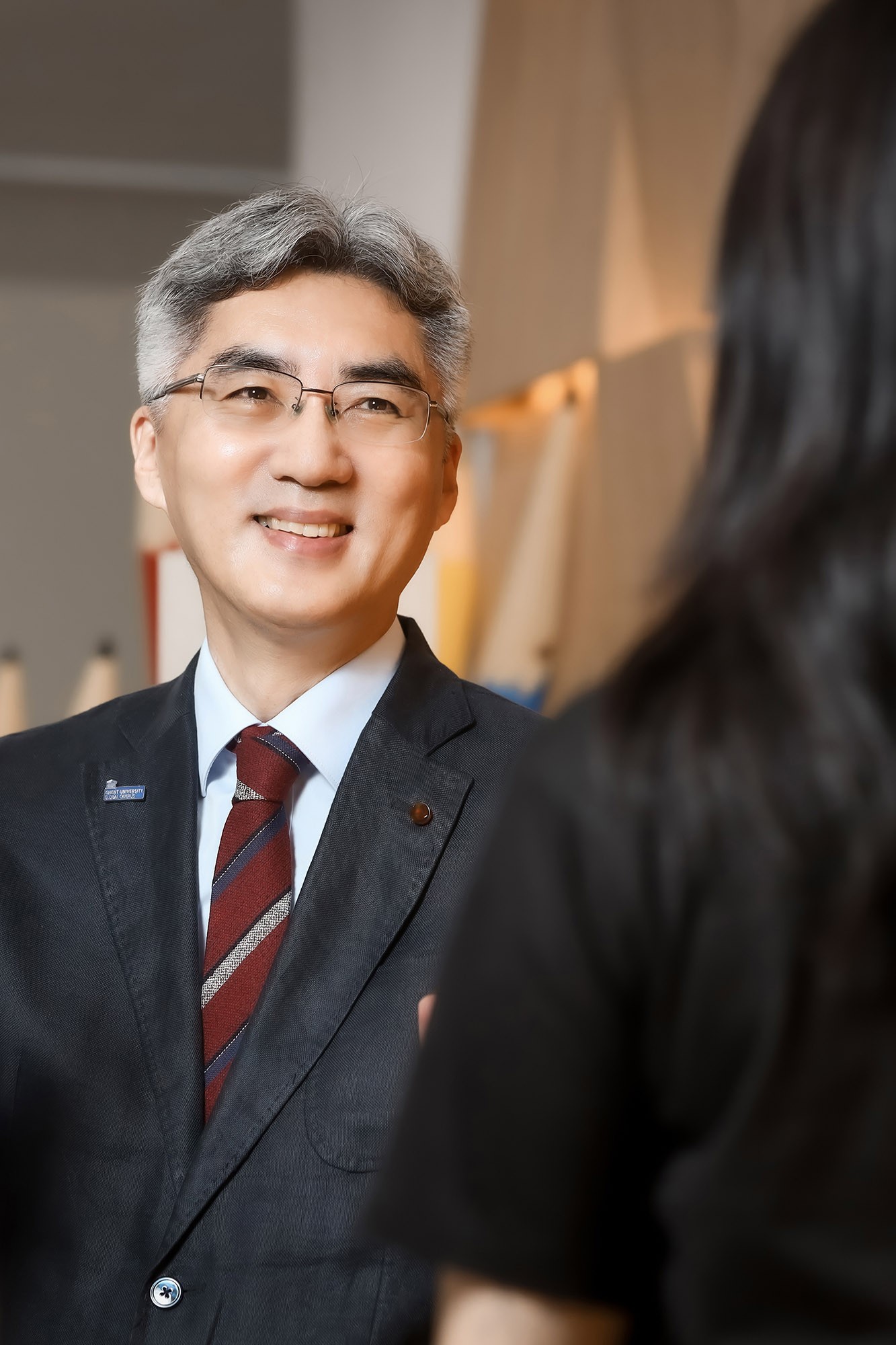 Campus President Han explains how it all got started: “in 2009, the National University of Incheon in South Korea proposed a bold plan to start a communal campus in Songdo with the backing of the South Korean government. I had worked with Ghent University before and I thought it would be a good idea to involve them in the project. After paying a visit to Ghent University and meeting with Paul Van Cauwenberghe, the Rector at the time, which was arranged by Guido Persoone, one thing led to another.”

Of course, for a project of this scale, it was important that everyone got on the same page. At a university this is no easy task. “Indeed, it took a while before everyone was convinced of the value of GUGC,” Rector Van de Walle remarks. “I’m not shy about admitting that I, just like many others, wasn’t a big fan of the plan in the beginning. Too much risk, too little return. Today, I have to admit that I was completely mistaken in my judgment. Due to the Global Campus, we can now rightly call ourselves an international university.”

“Immediately after the founding in 2014, 50 students enrolled in the three study programmes on offer,” Vice Rector Van Herreweghe states. “The programmes were taught in English and the students had to do an exchange semester in Ghent in their final year: an attractive prospect for South Korean students. This, unfortunately, did not lead to the expected rise in enrolments in the following years. Luckily, Taejun came on board as Campus President just in time to change things around.” 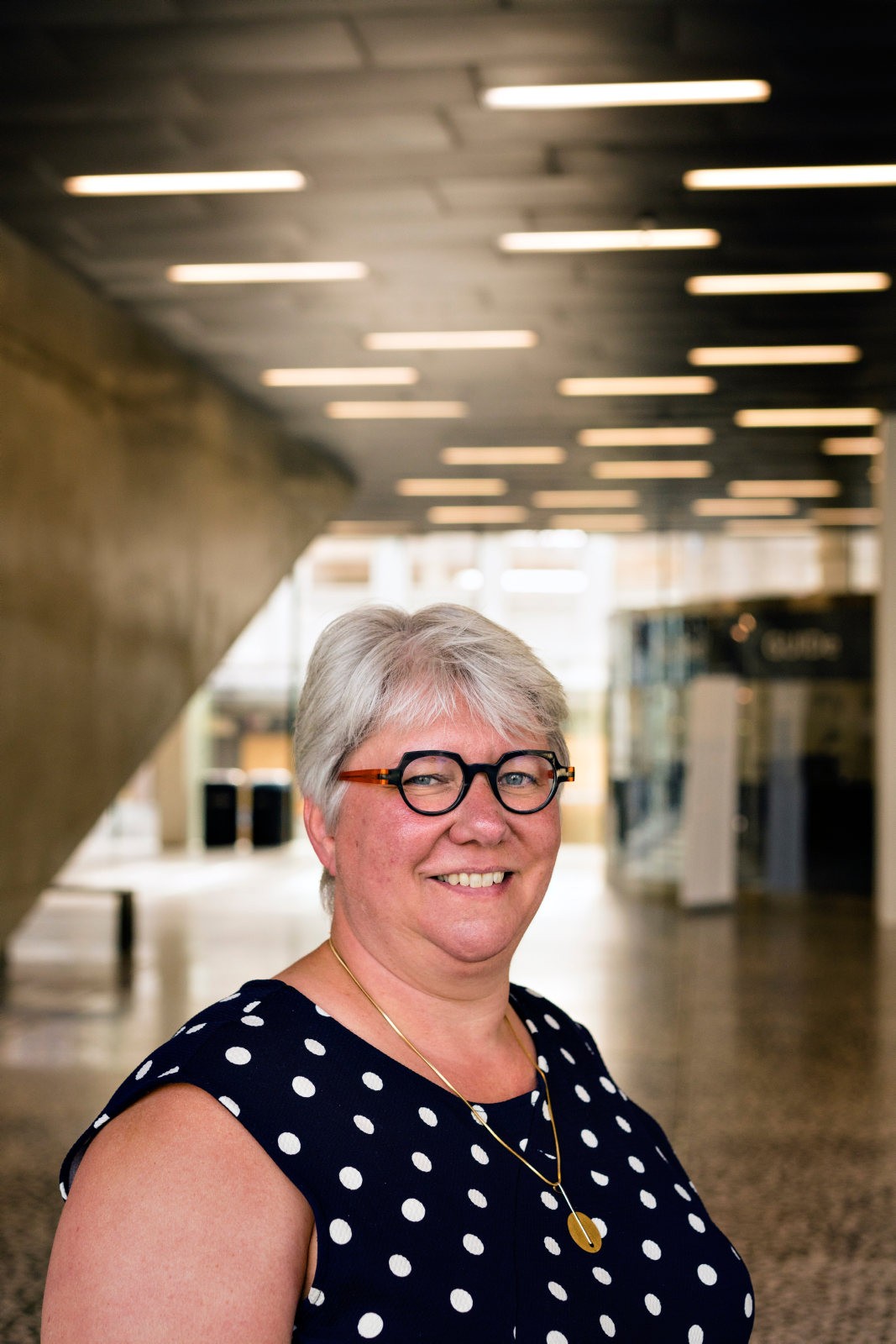 "We notice that a substantial part of the GUGC graduates choose to attend an English master’s programme in Europe, and some also in Ghent and sometimes stay on as PhD researchers. Founding a graduate school at GUGC itself would offer these same possibilities in South Korea, which would no doubt cause the number of students that choose this path to grow."
vice rector Mieke Van Herreweghe
33-67

“To improve the enrolment numbers, I proposed to change our recruitment focus to specific schools in a number of South Korean regions and to implement a programme in which local school headmasters could refer their promising students to us,” Campus President Han explains. “Due to the dedication of my staff, we were able to hit the 500-student milestone this year, regardless of Covid-19.”

This is no mean feat when one takes into consideration that students at GUGC also have to do mandatory military service. Campus President Han: “To mitigate the impact this one or two-year absence has in the middle of a student’s study programme, we actively stay in touch with our students during their service. We send them messages, newsletters and invite them to come over for a chat during their leave. In this way, they don’t lose touch with the university.”

GUGC has proven itself to be a reliable institution of education in the region. However, Rector Van de Walle emphasises that we shouldn’t lose track of the bottom line: “The high enrolment numbers mean a measure of financial stability for GUGC, independent of South Korean governmental support. But we still face several challenges. For example, the student body is mainly South Korean right now, while it was Ghent University’s intention for there to be a multitude of nationalities.”

Vice Rector Van Herreweghe explains that expanding GUGC with a graduate school could bring about the necessary change: “We notice that a substantial part of the GUGC graduates choose to attend an English master’s programme in Europe, and some also in Ghent and sometimes stay on as PhD researchers. Founding a graduate school at GUGC itself would offer these same possibilities in South Korea, which would no doubt cause the number of students that choose this path to grow. In this way, we would also be able to attract more nationalities. We are currently still in the planning phase, but it fits perfectly into Ghent University’s intentions to be a research-driven institution that dares to look beyond national borders.”

"The most important function of GUGC is its role as a research hub. The Global Campus is the Ghent University representative in the region. Locally, there is much interest in Biotech, Life Sciences and Food technology: fields of study in which Ghent University has an excellent international reputation."
rector Rik Van de Walle 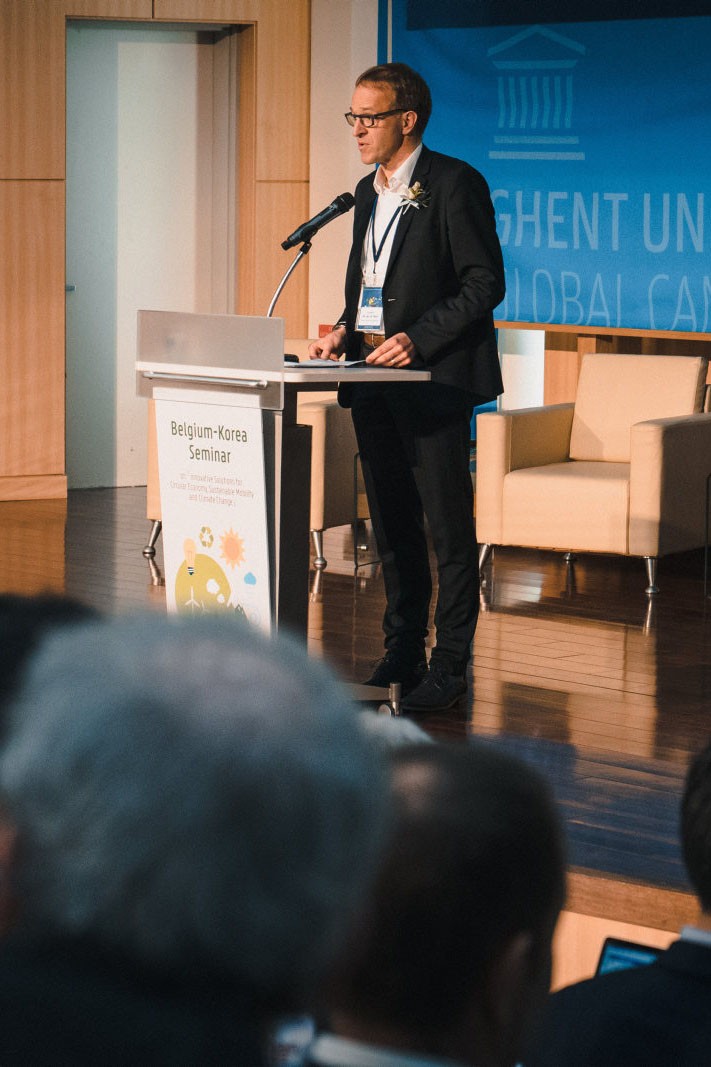 This focus on research at GUGC is very important according to Rector Van de Walle: “The most important function of GUGC is its role as a research hub. The Global Campus is the Ghent University representative in the region. Locally, there is much interest in Biotech, Life Sciences and Food technology: fields of study in which Ghent University has an excellent international reputation. This translates into active support by the South Korean government and a multitude of collaborations by both the Global and the Home Campuses with local institutional and private partners.”

Campus President Han seconds this: “A unique aspect of institutions of higher learning in South Korea is that the government demands that they be self-sufficient, but – and this is where it differs from its Belgian equivalent – it can also engage in for-profit business. A foundation created by GUGC for this express purpose has been tasked to attract research financing, engage in tech transfer and initiate collaborations with local partners. Besides this, it also undertakes profitable business ventures.

Right now, the Global Campus is actively looking into ventures having to do with seaweed, such as the development of algae for medical imaging, the use of plant proteins in seaweed to mitigate or stop the effects of dementia and even the production of seaweed wine and beer, a research project which was developed together with Home Campus colleagues.”

“Taejun took me to SoSungJu, one of the country’s largest wine-makers, to taste this seaweed wine during a previous visit to Incheon,” says Vice Rector Van Herreweghe with a smile. “Personally, I think it’s kind of an acquired taste. But you can’t deny how popular seaweed is among South Koreans. The potential for these types of products is enormous.”

Professor Wesley De Neve has been teaching Korean Ghent University students there for years and also conducts research there: "We can learn a lot from other countries, and here in South Korea we are closer to the source of a lot of knowledge. The campus serves as a bridge to Asia. Moreover, we are cooperating with other top universities on a brand-new international campus, so the exchange of knowledge is great."

Studying abroad is always an adventure. Student biochemistry and biotechnology Simon Knockaert felt more than at home on the Ghent University Global Campus in South Korea, 9,000 kilometres from Ghent.