Why has the ‘Ghent University Alumnus of the Year’ award been created?

Kristiaan Versluys: “On the one hand, it can be seen as a prestigious scientific and social award by an important institution. A sort of Nobel Prize, if you like. Not that I want to compare it to a Nobel Prize per se, but (laughing) maybe it can be seen as a smaller version of one! But at the same time, it also gives us the chance to celebrate ‘one of our own’. Think of it as a sort of champions’ league, but with Ghent University, and its alumni rather than footballers. It is a wonderful way in which to honour our alumni and to highlight their achievements.”

Why are the alumni so important to Ghent University?

“According to our estimates, there are about 300.000 Ghent University alumni worldwide. If we are able to mobilise just a fraction of that reservoir of highly educated, influential people for the benefit of the university, then our mission will have been a complete success. And that applies to every aspect of what we do. Alumni have an important role to play as regards education, research, reputation management and talent development. Think about students who are looking for some sort of traineeship, for example. It is much easier for us to approach a Ghent University alumnus to help with this. And then there are our foreign alumni. Imagine that a Chinese student is considering coming to Gent to continue his or her postgraduate studies. In this case, it is extremely valuable for us to be able to bring that student into contact with a fellow countryman (or woman) who studied here previously and therefore knows Ghent University well. Alumni can also contribute to our research work. Many of our ex-students now occupy important positions in the business world. If their company is thinking of establishing some sort of collaboration or partnership with a university, then naturally, these alumni will tend to favour their old university.”

So there is also an emotional factor involved?

“There are 35 Ghent University alumni organisations in Flanders, and another ten or so abroad. Most of these came into being spontaneously, simply because former students felt the need to stay in contact with each other, and with the university. Of course, this makes a lot of sense. Most people experience a significant personal development during their time at university. You start your studies around the age of 18, as a teenager with very little life experience. But by the end of your studies, some four, five or even six years later, you have become an adult. During your time at university, you don’t just learn more about a particular subject, you also develop as a person. So the university actually becomes part of your own identity.”

Stay in touch with your fellow alumni and with Ghent University.

So in fact a good alumni department is essential?

“Absolutely. Partly for nostalgic reasons, partly for social reasons, and also partly in order to be able to network and meet with professionals working in similar fields of business or expertise. The various reasons are relevant at different stages in life. For recent graduates, the social reasons are more important, for example, than they are for alumni who graduated more than twenty years ago.”

So it’s more than just a way to make contacts?

“Of course it is always useful to have those contacts. But it is also a question of fundraising. Who are the ones who make generous donations to fund research? First and foremost, it is our alumni. Upon condition, however, that their own university experience was a positive one. And that is why we always say that the work of the alumni department actually begins on the day a future student enrols at the university. If your time at university was not good for some reason, be it social or intellectual, then you’ll not harbour positive feelings towards your alma mater.”

What is important in a good alumni programme?

“There’s a lot of work involved. Every faculty at the university works with the alumni department. It was a university-wide decision to focus even more on the importance of a well-functioning alumni department. We have put together a forty page action plan. A good alumni programme needs to include activities that the alumni will find interesting, such as training courses, lectures, company visits, accompanied museum visits, travel, and, as of now, also a celebration for the alumnus of the year. Some of the university faculties already had some sort of similar accolade, but there was no university-wide alumnus of the year award. Up until now.”

Steven Van Gucht will receive the first ever award for Alumnus of the Year. Are you happy with the choice of winner?

“Personally I think that he is a worthy winner. He has been playing a vital role in a major health crisis, something I hope that we will all only experience once in our lives. It is the very first time that we have actually been able to witness a sort of boxing match between science and destiny in real time. Various Ghent University alumni have been on the right side in the fight, including Steven Van Gucht. He has played a very public role in the crisis, and has done this in an unparalleled way. Before the crisis started, outside the scientific world, almost no one knew who he was. In the meantime he has become a national celebrity, and his name crops up every five minutes in the press. He exudes confidence, but is certainly not over confident. I think it is a very good choice.”

Steven Van Gucht: “Sometimes we humans are too pretentious” 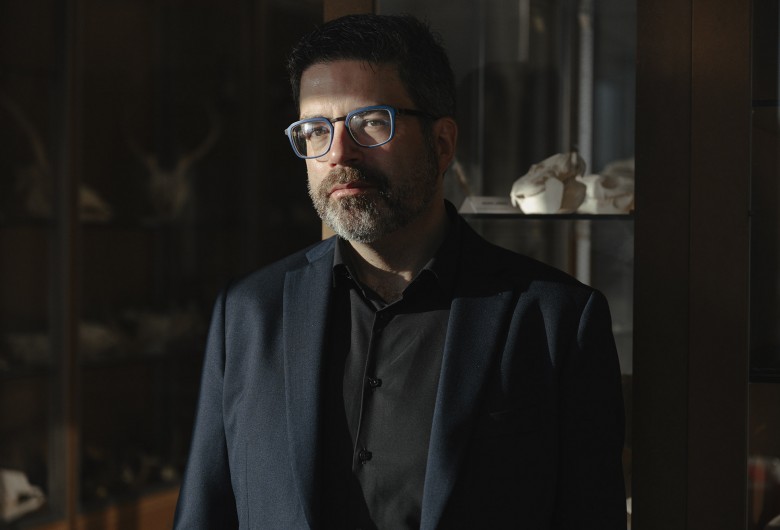 He has played an incredibly important role in fighting the corona pandemic and makes regular appearances in the media. And on top of that, Steven Van Gucht can now claim the title of the very first ‘Ghent University alumnus of the year’. Our meeting is held among the skeletons in the Morphology museum in his old faculty.