Why one bird flies further than another

The darker a bird’s wing, the better it can fly. That’s the conclusion reached by Michaël Nicolaï, as a biologist and researcher at Ghent University. “Pigment seems not only to give colour, it also helps in flying for longer.”

The biologist and researcher Michaël Nicolaï has been fascinated by animals and colours ever since he was young. “For me, observing colourful animals is like studying a work of art”, he says. “I have two grandfathers. One is a painter, the other is fascinated by the animal kingdom. I am a combination of both.”

It was written in the stars that Michaël’s doctorate would be about the importance of colour in animals. In the EON Lab (Evolution and Optics of Nanostructures) at the Biology department he has investigated the evolutionary importance of pigments in birds.

Birds with a black skin

He began by looking into the role of skin colour among birds. “A colleague was preparing a stuffed wing from a Northern gannet for a wind-tunnel experiment. This sea bird has white feathers, but we noticed its skin was a deep black colour. We were surprised, because most birds have pink skin. We had never noticed the gannet’s black skin, as it was so well hidden under its white plumage.”

Michaël Nicolaï was keen to know just how unusual this gannet’s black skin actually was.

“I visited museums in Belgium and abroad to study the skin colour of all kinds of other birds. Among the approximate total of 2,500 birds I investigated, 5 per cent turned out to have black skin. What was striking was that they either had light-coloured feathers or were bald. Most of all they lived in regions with lots of sun and high levels of UV. The distribution of the pigment melanin in a bird’s skin is identical to humans. Therefore we strongly suspect that birds are protected from UV rays by their skin colour, in the same way as we are.”

Then Michaël was keen to discover whether the melanin in the sea gannet’s wings gave any kind of flying advantage. “Based on a rather limited American study we know that black wings fly more efficiently, because they warm up more easily. I tested the theory out in a wind tunnel with the stuffed wings of our Northern gannet. We exposed the wings to a heat source representing the sun. In the wind tunnel the dark wings flew more efficiently.”

The Americans were right. Michaël: “I wondered: is that black colour and effect a coincidence, or did evolution take advantage of that pigment? I delved deeper and discovered that the seabirds that can fly for an extremely long time, such as the albatross, all have black wings.”

Conclusion: the better and longer a bird flies, the more likely it is to have black wings. “It seems highly likely that evolution has ‘discovered’ this effect and made good use of it.” 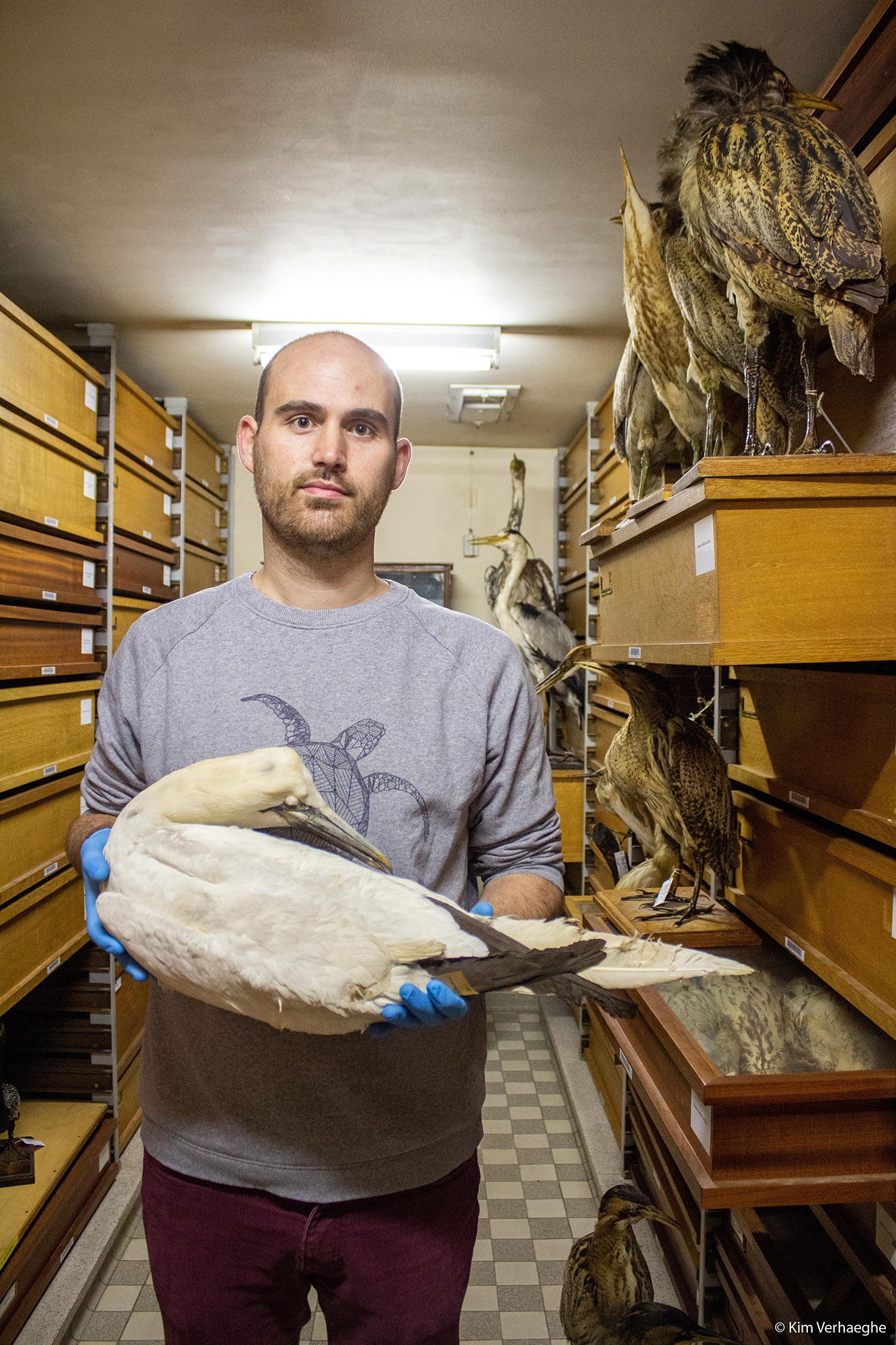 Using his wind-tunnel research, Michaël revealed a new purpose of the pigment melanin. “We used to think that the biological pigment in the skin was mainly for colour. As a means of communication and sometimes to protect against UV rays. With our research we showed that it can also affect the flight capacity. When we increased the speed in the wind tunnel to 20 metres per second the effect remained. Some drones fly at that speed. Perhaps my findings will help in flying those things more efficiently.”

By giving drones black wings? “For example. During my research, I collaborated closely with the Von Karman Institute for Fluid Dynamics from Sint-Genesius-Rode. Over the past decades they have gained tremendous expertise in aviation. They told me that they had witnessed the same phenomenon in the case of aeroplanes: black plane wings fly more efficiently in the sunshine.”

So why don’t we paint the wings of aeroplanes black? “Because they store the heat and that can be dangerous for an aeroplane, since the wings are also where the fuel tanks are located. It is best that aeroplane wings remain white in order to prevent these from overheating.”

The reflection is an example of biomimetics or biomimicry. This uses the smartest ideas in biology from nature for new inventions or improvements to today’s human applications. “Biomimetics is founded on 3.8 billion years of evolution.” A few of Michaël Nicolaï’s colleagues in the EON lab are specialists.

“Personally, as a biologist, I am interested most of all in the question why some animals are so colourful and others are not”, he says. “Some birds have iridescent colours, such as peacocks. Contrary to ‘normal’ colours, iridescent colours do not absorb the light. Instead they reflect it. The colour then depends from which angle you observe it.”

“In the coming years I am keen to examine the mechanism behind these iridescent colours. After all, it is still unknown. It’s clear why companies with a professional interest in colour are rather interested in our research.”

Does Michaël Nicolaï hope to reap the financial rewards from these findings one day? “I’m not particularly bothered about money”, he laughs. “It is not my intention to gather as many patents as possible. Although I am always keen to give my colleagues a hand, so that they can get a patent.”

Michaël Nicolaï is a researcher at the EON Lab. His doctoral research about the evolutionary benefits of colour among birds is founded on his interest in animals and art. Besides being a biologist he is also a keen photographer. “If I wander around a museum that is dedicated to birds for my scientific research I always find one surprise after another”, he admits. “A bird museum like that is just like a treasure chest.”