David De Wolf
works at the Department of Communication & Marketing and is passionate about research in every way, shape and form.
Research and society
Physics

Physicists at Ghent University have succeeded in cooling several ten thousand atoms to just above absolute zero (about -273°C). In doing so, they created a so-called Bose–Einstein condensate: a state in which all atoms behave exactly the same, as was once predicted by physicists Einstein and Bose.

It is 13 December 2021. In the basement of building S9 on Campus Sterre, Karel Van Acoleyen, researcher and lecturer at the Department of Physics and Astronomy, and PhD student Clara Tanghe try to explain to me exactly what they do there. In a corner of the room, shielded by heavy curtains, stands an optical bench; a type of table that is extremely stable and heavy. I’m amazed at how small the set-up is on the bench: only a quarter of the table, or approximately one square meter, is taken up by it. In the centre stands a small, transparent vacuum cell about ten centimetres in width, depth and height.

This is the place, they tell me: the first Bose–Einstein condensate in Belgium. A veritable tour de force – if I’m to go off what the researchers tell me. Last week, Cold Quanta, a specialist company from Colorado, came to Ghent to help fine-tune the set-up. At the time, I was on the phone with Karel. That night would be the night, he said, they would continue on until they had it. But to no avail. 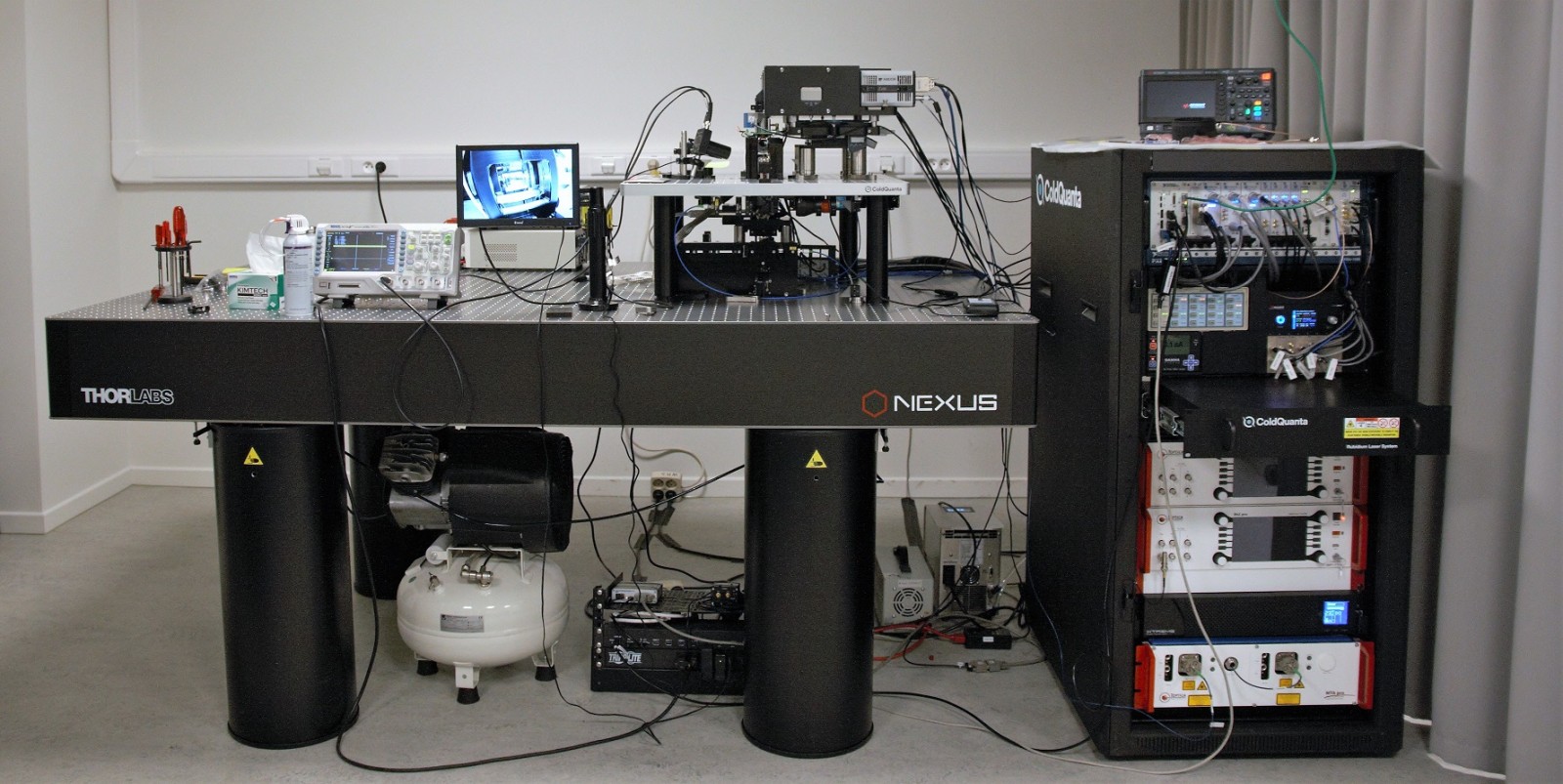 At the start of March, I inquired as to how they were progressing. “It’s been a bumpy ride, to say the least,” writes Karel. They're not quite there yet. On 10 May I received another email: “We've made some serious progress in the last few weeks – and it looks like we may be able to create our Bose–Einstein Condensate this week...” 16 June turns out to finally be the day. On that exceptionally hot day, Karel and Clara managed to cool several ten thousand in a small vacuum cell to less than a millionth of a degree Celsius above ! That is spectacularly cold; much colder, in fact, than the farthest reaches of our universe, where it’s about 2.7 degrees Celsius above absolute zero. 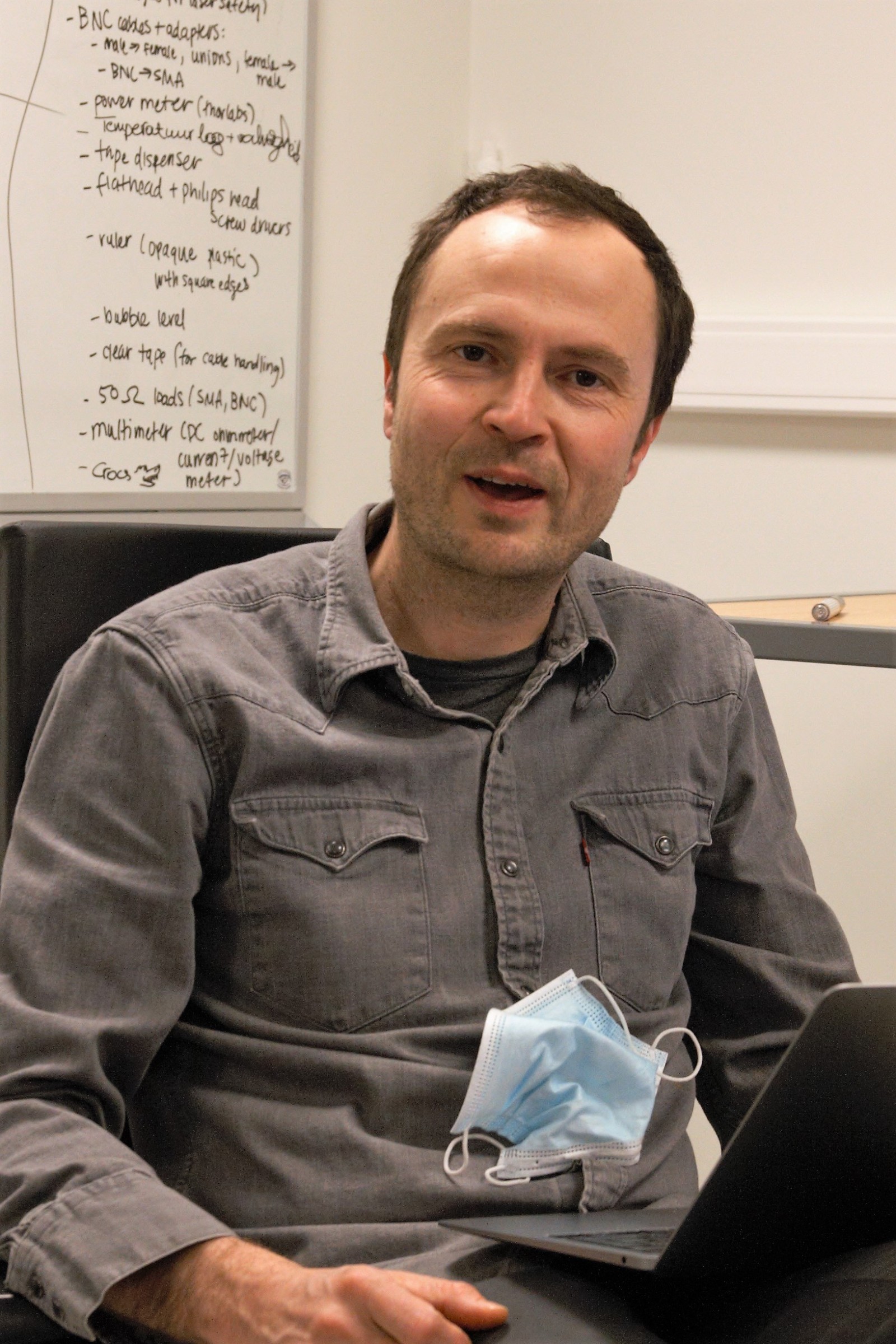 Although he’s a theoretical physicist, after many years of calculating and programming, Karel felt he also wanted to venture into experimental work. “Some things are incredibly difficult to calculate,” he says. “A mass of a few thousand or a few ten thousand atoms, each with its own velocity, position, etc., is in itself hugely complex to describe. In the regime where quantum physics becomes important, it’s even impossible. For example, if you tried calculating how a group of atoms behaves when you bring it out of equilibrium, you’d immediately hit a wall. Through experimental means, however, it is possible to answer such questions. Using these results, we can then try to refine the theoretical models.”

Clara adds: “I have always been fascinated by quantum physics. The possibility of being part of the development of a new set-up with which we would be able to conduct our own quantum experiments seemed like exactly the kind of challenging adventure I was looking for as a PhD student.”

So, they got to work in the lab. To cool the atoms, the researchers use sophisticated lasers and magnets to slow down their speed. The slower the atoms, the lower the temperature: the latter being, after all, essentially a measure of the speed at which atoms or molecules move. The air molecules you are currently breathing are moving at an average speed of about 600 meters per second (2160 km/h), just like the rubidium atoms do in the experiment before they’re cooled. Using a procedure of a few dozen carefully programmed steps, Karel and Clara abruptly put the brakes on them over the space of ten seconds, after which they finally come to a near standstill. Atoms that don't follow suit are blown away and are no longer ‘part of the equation'.

The experiment really captures one’s imagination. Each of the six steps and hundreds of substeps of the cooling process have to be just right, and it’s not possible to simply copy the recipe from similar experiments. The correct parameters for the different lasers and magnets depend on the precise positions of the different instruments, as well as, for example, the Earth's magnetic field, which varies slightly from place to place. 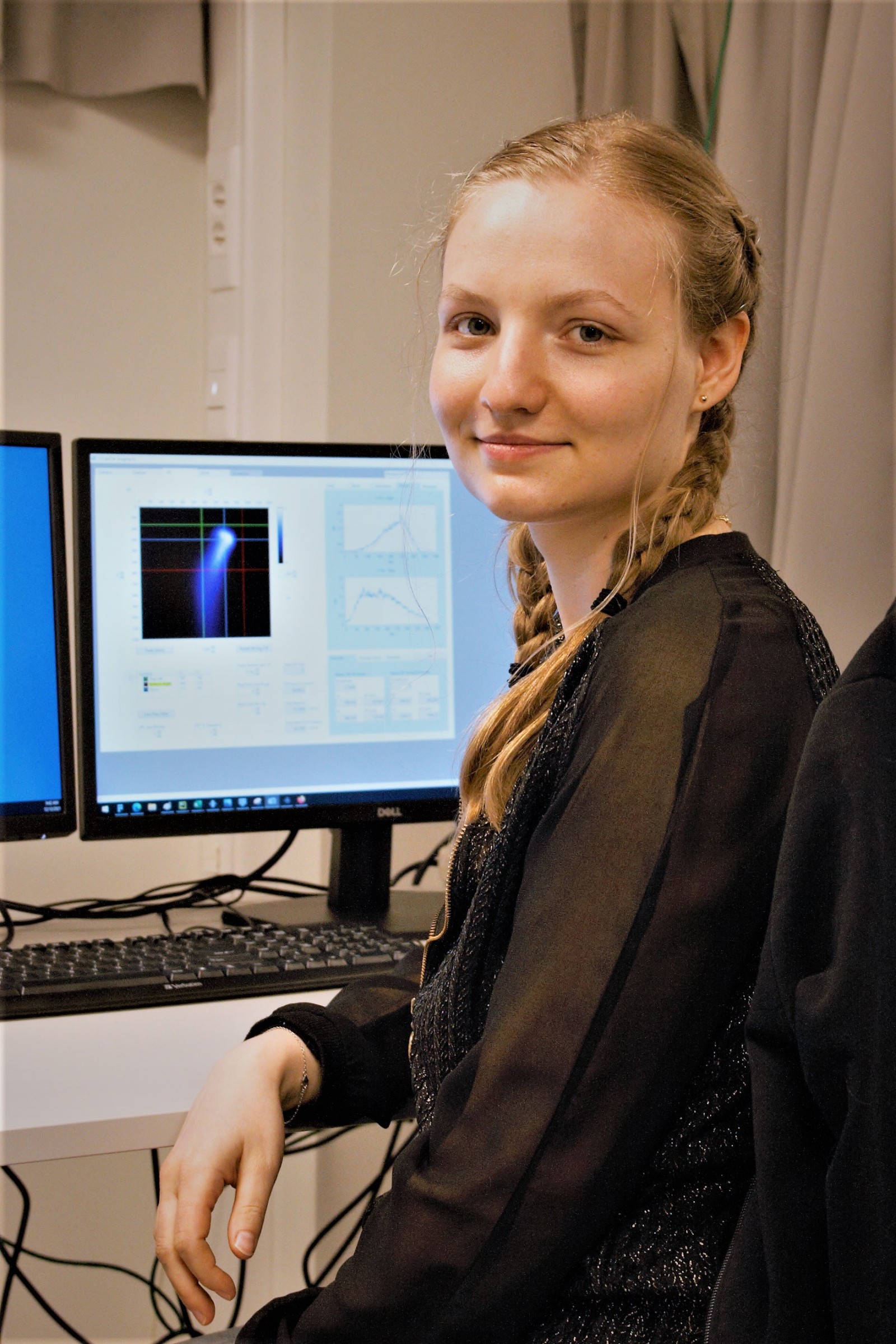 Now that they've found the recipe to make a BEC, as the researchers fondly call their Bose-Einstein condensate, at that particular location, with that particular set-up, the goal is to do it on a daily basis. “Now’s when the actual work begins,” Karel emphasises.

The atoms in a Bose-Einstein condensate no longer behave as separate entities, but as one super atom or quantum field. There are no separate speeds, directions, etcetera. Everything is aligned perfectly. 'Entangled', as quantum physicists call it. As if they are one. They exhibit the quantum behaviour of individual atoms, but magnified many times.

And this is where the great advantage of working with cold atoms becomes immediately apparent: the strange quantum world phenomena that physicists are familiar with, such as particles (photons, electrons, ...) that can 'feel' and 'influence' each other at great distances, particles that are in different states at the same time until you observe them directly (as is often explained with the famous Schrödinger's cat metaphor) or particles moving through a barrier from A to B, suddenly become observable on a much larger scale.

In December, I first saw the near-BEC. It was a cigar-shaped cloud, about a centimeter across. The final BEC is a bit smaller – about a tenth of a millimetre long – but, by using relatively uncomplicated equipment, it’s possible to capture it in high-resolution photos, which are then used as the basis for analysis.

“There are three domains in which modern physicists try to push the boundaries of knowledge,” Karel explains. “In high-energy physics we investigate the very smallest of elementary particles, while in cosmology we want to understand the very largest. The third domain lies in between and is that of the so-called many-body systems: which new phenomena emerge when you bring a lot of particles – quarks, electrons, atoms or molecules – together? That’s what we aim to research using this set-up.” 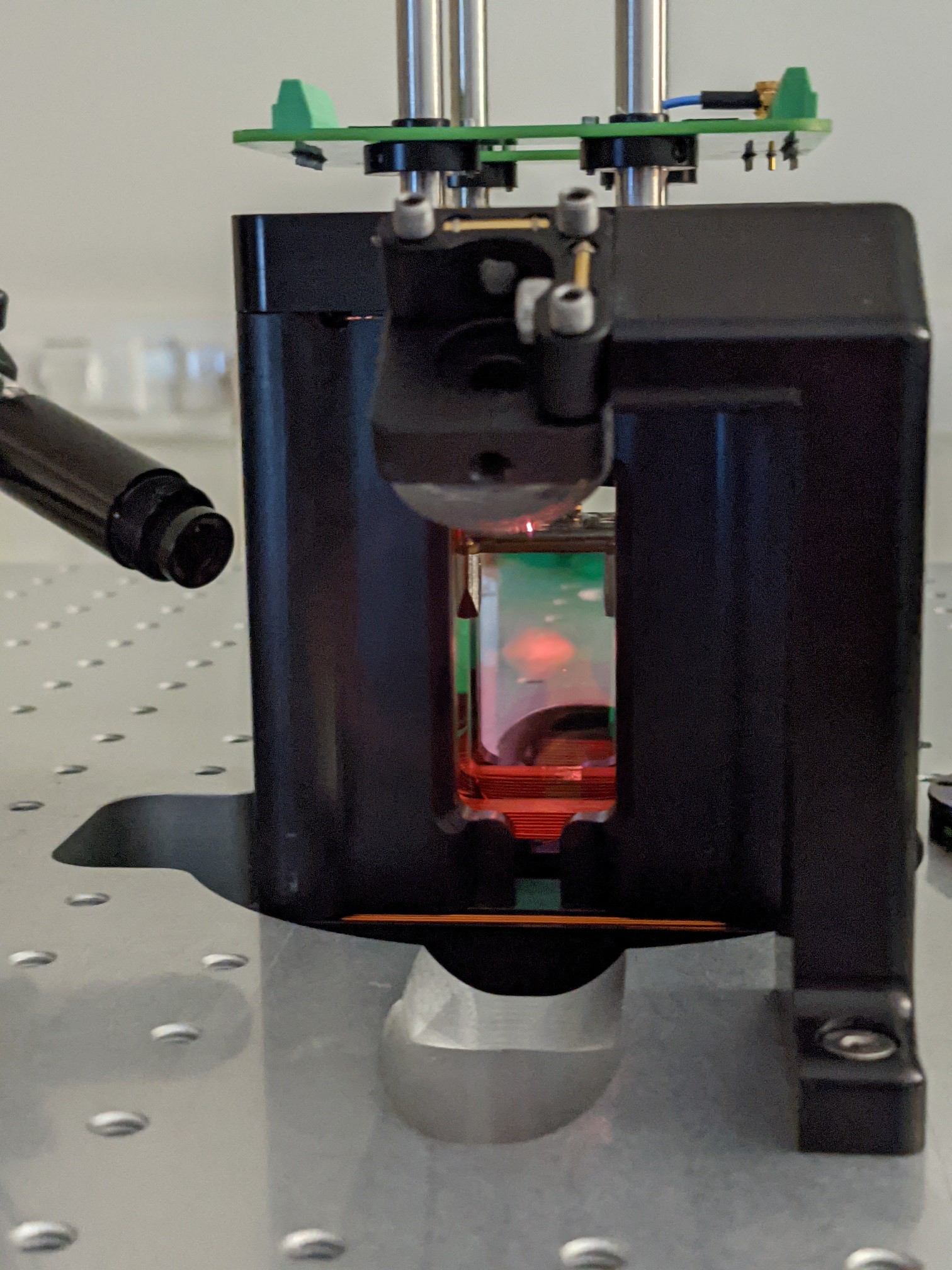 From black holes to solar panels

In their press release, the researchers described it as ‘Fundamental research into the dynamic behaviour of quantum fields’. Such fields occur at different levels in nature, from black holes to the particle accelerator at CERN in Geneva. “Using our BEC, we not only have the possibility to learn about the physics of cold atoms, but also about exotic phenomena such as the 'evaporation' of black holes,” says Karel.

At the same time, both researchers also look forward to conducting experiments to aid in applied research. “In time, we want to further develop our set-up towards a so-called quantum simulator. By making the cold atoms react with each other in varying, very precise ways, it’s possible to simulate other materials. This could lead to interesting developments in the search for new useful materials that, for example, convert light into electricity more efficiently – which would be useful for better solar panels – or conduct electrical current with virtually no loss; so-called superconductors.”

I would not have thought of these applications myself – as opposed to, for example, quantum computers, for which the BEC research could also prove useful. They remind me of something Professor Frank Verstraete told me when he popped into the cellar for a minute during my visit in December. After having worked abroad for a long time, he returned to our country ten years ago via the prestigious Odysseus programme for top researchers. “Everyone knows Einstein and his theory of relativity. But quantum mechanics, which emerged during the same period, had a much greater impact,” Frank said at the time. “All natural sciences have been changed by quantum mechanics. Chemistry of course, but also materials science. Even biology is affected – researchers now suspect that quantum processes play a role in photosynthesis. The fact that we at Ghent University are now the first in Belgium to also be involved in experimental research is very exciting, even though there are dozens of other groups in the world also working on these problems.” 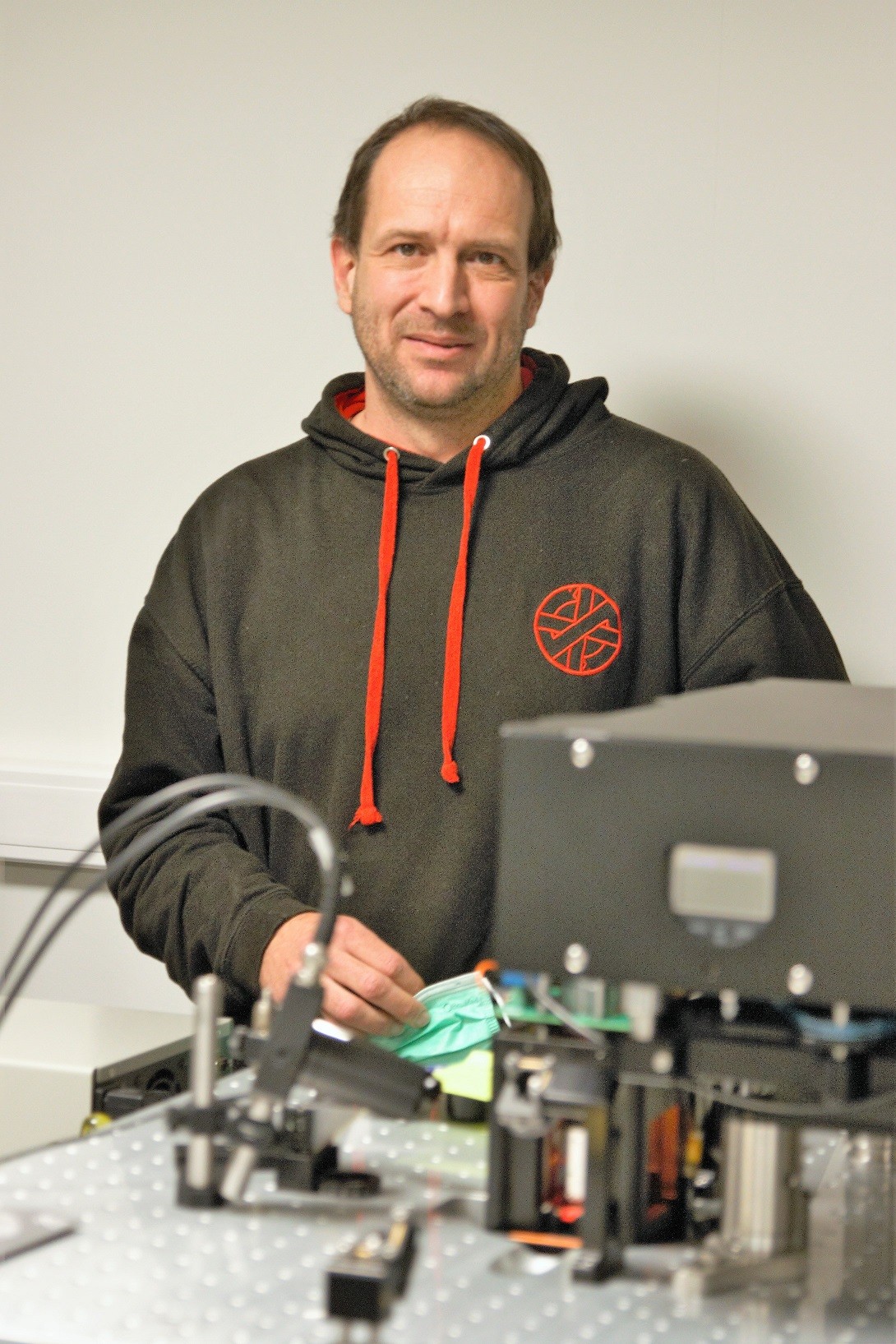 Whenever I now pass Campus Sterre in Ghent, I feel, even more so than before, a mix of admiration – for the researchers – and wonderment – about the fascinating world in which we live.