Recognised by Unesco, the Yangambi Biosphere Reserve in the Democratic Republic of Congo seems to be gradually becoming Professor Pascal Boeckx’s second home. When we meet, he is just back from his latest trip to the DRC for maintenance work on the climate tower, together with his colleagues from the Department of Green Chemistry and Technology.

He has visited the site no less than eight times since the beginning of 2020, when building work on the tower started. The aim of these visits is twofold: first of all for work on the tower itself, but also to meet and talk with people living in the surrounding area. “That dialogue remains vitally important,” he explains. “Because there have been a number of strange rumours about our tower. According to one rumour doing the rounds, the tower’s real purpose was to pump out pure Congolese oxygen to be shipped to the heavily polluted country of Belgium. So our meetings gave us the chance to put the minds of the local community at rest by explaining to them exactly what it is we are actually doing.”

Professor Boeckx has been investigating climate change for 30 years. From 1999 to 2015 he was actively involved in the IPCC (the United Nations’ Intergovernmental Panel on Climate Change) as a bio engineer. “At long last more and more people are starting to realise that climate change is the biggest problem we are facing today. It is a pity that it has taken so long, because we have had the scientific evidence for this for a number of decades. Climate change is responsible for the extreme weather phenomena that different parts of the world have been experiencing. That includes what we have seen here in Belgium: first one dry summer after another, followed by flooding in Wallonia. Of course, there were numerous extreme weather events in the past as well, but the frequency with which they are occurring now is completely new. And unfortunately, this is only going to increase.“

What does the tower actually do?

“Climate towers - or flux towers - measure the net capacity of different natural ecosystems to absorb greenhouse gases. There are towers like these to be found all over the world, not just in forests, but also on grasslands, marshes, lakes and fields. Forests absorb CO2 through photosynthesis, but they also emit CO2 due to respiration and other breathing mechanisms. The difference between these two processes of determines the net capacity of each ecosystem to capture and store CO2.

Our tower is measuring the forest’s net capacity over a surface area of just 2 km2 whilst the Congo basin covers an area of 3,7 million km2. For this reason, we are using other measurement methods as well. Once we have the results of all the different measurements we will be able to calculate how much CO2 is captured and stored by the rainforest each year”. 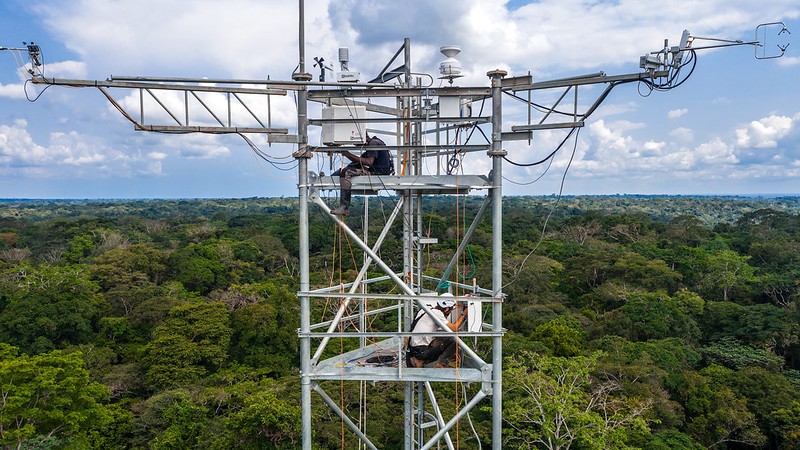 How can this information help in the fight against climate change?

“The flux tower can help us to make more precise estimates regarding the amount of CO2 a tropical forest can store on an annual basis, as well as the evolution of this storage capacity. But the truth is, we are never going to win the fight against climate change with nature alone, i.e. forests that capture and store CO2. This battle will really only be won through daring political decision-making.”

How can this information help in the fight against climate change?

“The flux tower can help us to make more precise estimates regarding the amount of CO2 a tropical forest can store on an annual basis, as well as the evolution of this storage capacity. But the truth is, we are never going to win the fight against climate change with nature alone, i.e. forests that capture and store CO2. This battle will really only be won through daring political decision-making.” 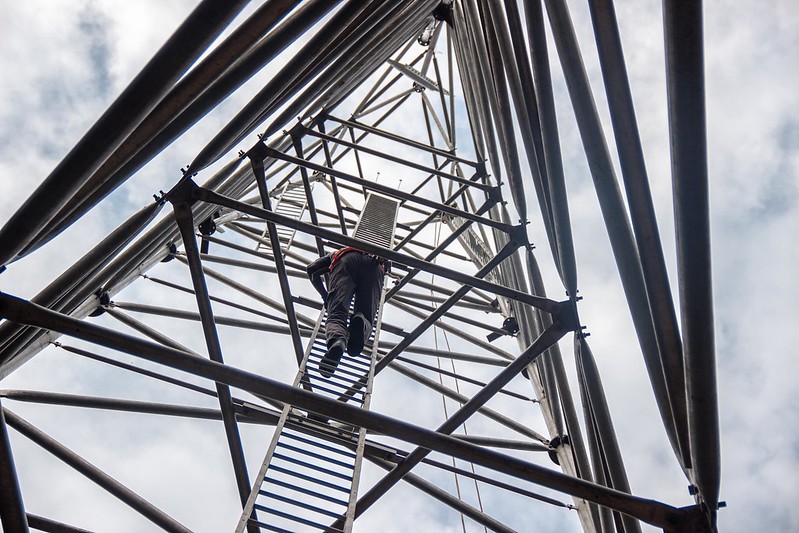 Are you able to monitor all the measurements from Gent?

“At 1 am every morning the results of the previous day are automatically sent through to Ghent. At exactly the same time they are also saved on hard drives and memory cards in the tower itself, as a backup. A Congolese technician visits every week in order to check that all of the instruments and sensors are working properly, and climbs up the 57 metre high tower to collect all the data. In doing this, we try to guard against all possible risks. We have a technician in Ghent who controls the tower itself. And there are a number of doctoral students who are also carrying out scientific research based upon the data received from our flux tower. ”

Why does the tower need to be so high?

“The trees in a tropical rainforest are gigantic: the forest canopy, or top layer, is about 35 metres high. The top of our tower is approximately 20 metres higher than the canopy. You don’t need to construct a tower of this immense height on grassland. But the size of the surface area your sensors can monitor to record measurements is directly proportional to the distance between the forest canopy and the top of the tower – the higher the tower, the more extensive the area of measurement.

The tower was built in 2020, right in the middle of the corona crisis. That must have been a challenge?

“Indeed, it was very difficult at times. The components of the tower were loaded into six containers and transported by ship from Antwerp to Mombasa in Kenya in January 2020. From there, a convoy of three trucks carried them to Congo via Uganda. On the day the whole world went into lockdown our three lorries were queuing at the border control between Uganda and Congo. Two of the trucks managed to get across the border before it shut. Unfortunately our third truck was a little delayed, and the border police saw a chance to earn a nice little extra. It was a tough negotiation to get the third truck across the border into DR Congo.

At Kisangani, the containers were put onto a barge and transported 100 kilometres along the River Congo. The Congolese builders constructed the tower without using any kind of crane, pulling each 5 metre long section up the tower one at a time. It was unbelievable. And then in October 2020 we were able to install the first of our instruments in the tower.”

Where does the energy that drives the tower come from?

“From the sun. We also built a large solar park with eighty solar panels along with the tower, on an existing open stretch of land just a few kilometres from the forest, which meant we didn’t need to chop down a single tree. Eighty solar panels may seem a lot just to provide the tower with electricity, but the fact is that we are planning to introduce more measuring instruments there in the future. We also installed emergency solar panels on the tower itself. There’s already been one lightning strike; believe me, in the rainforest, back-up solar panels are anything but an unnecessary extravagance. ” 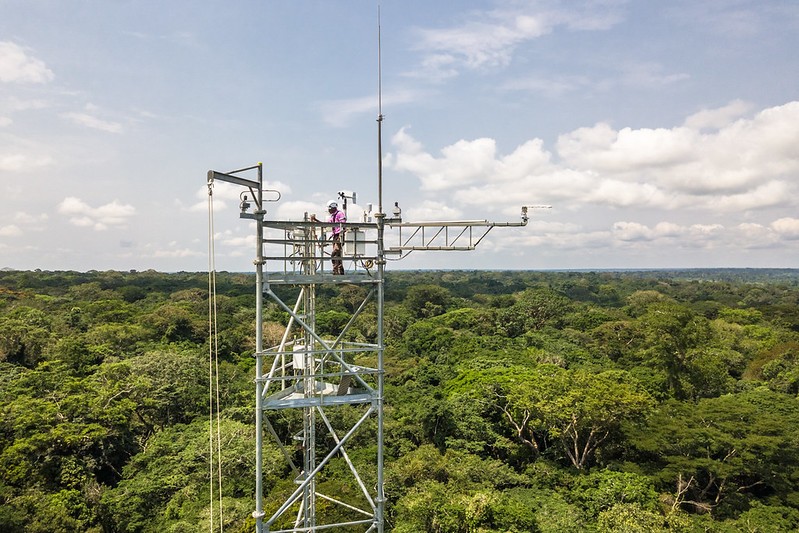 Is it too early for definitive results?

“Yes it is, but we have been taking other measurements from the region for a while. The temperature has been registered in detail every day since 1960, so we know that it has risen by one degree over the past sixty years. The difference between 25 and 26 degrees may not seem very much at first glance. But we have also seen that there has been an increase in the number of extremely warm days, with a temperature of over 32 degrees. The level of rainfall has stayed fairly constant, but these days the rainstorms themselves are heavier than ever before.”

Is that not a cause for concern?

“The tropical rainforest here is important not just because of its capacity to store CO2, but also for the water cycle in Congo and neighbouring countries, including Ethiopia and South Sudan. The water that evaporates via the forest drives the rainfall in that part of Africa. Our biggest concern is that at a certain point, we are going to arrive at a pivotal moment, or ‘tipping point’. If the temperature rises above 32 degrees, then photosynthesis in the leaves will reduce dramatically, and there will be less water evaporation. Today the rainforest is green all year round, but an increase in temperature could result in the trees losing their leaves in the dry season. And if that happens, then the way the whole ecosystem functions will change completely.” 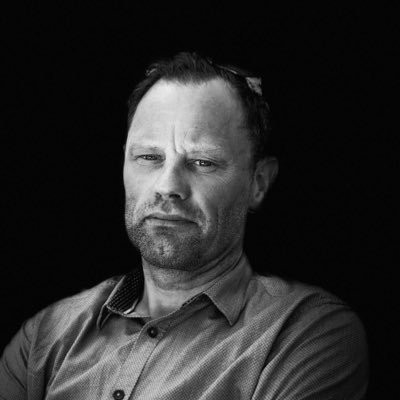 Pascal Boeckx is a Professor in the Department of Green Chemistry and Technology, which is part of the Faculty of Bioscience Engineering. Since last year his name has been included in the Reuters Hot List, a list of the most influential climate scientists.